Between Habit and Legislation: Land Rights in West Africa - European and International Cooperation

The majority of the population in Burkina Faso, Benin and Togo lives from agriculture and livestock. The legal framework for land management is characterised by a dualism between state laws and traditional customary rights. Local customary laws still mainly govern the ownership, use and transfer of land. Only a few small farmers are officially registered as landowners at state level. In this context, women have de facto no secure access to land – despite legal equality and their key role in agriculture. In order to strengthen the process of implementation of modern land laws and thus the economic role of women and food security, an in-depth dialogue and close cooperation between the women directly concerned, civil society organisations, customary and religious authorities, public authorities and other policymakers is necessary.
March 11, 2020 Ordering Information 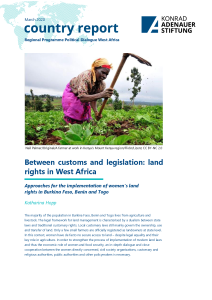 Between customs and legislation - land rights in West Africa
Download

Islamist terrorism after the Taliban takeover