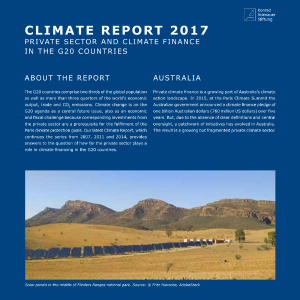 Private climate finance is a growing part of Australia’s climate action landscape. In 2015, at the Paris Climate Summit the Australian government announced a climate finance pledge of one billion Australian dollars (760 million US dollars) over five years. But, due to the absence of clear definitions and central oversight, a patchwork of initiatives has evolved in Australia. The result is a growing but fragmented private climate sector. 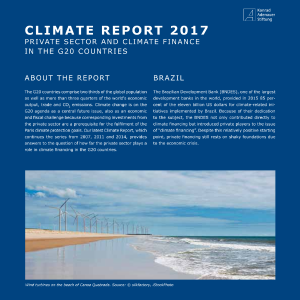 The Brazilian Development Bank (BNDES), one of the largest development banks in the world, provided in 2015 85 percent of the eleven billion US dollars for climate-related initiatives implemented by Brazil. Because of their dedication to the subject, the BNDES not only contributed directly to climate financing but introduced private players to the issue of “climate financing”. Despite this relatively positive starting point, private financing still rests on shaky foundations due to the economic crisis. 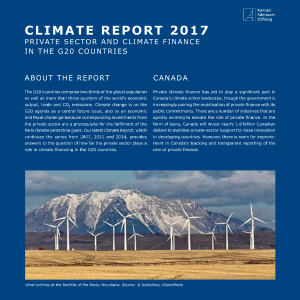 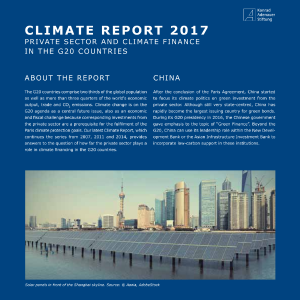 After the conclusion of the Paris Agreement, China started to focus its climate politics on green investment from the private sector. Although still very state-centred, China has rapidly become the largest issuing country for green bonds. During its G20 presidency in 2016, the Chinese government gave emphasis to the topic of “Green Finance”. Beyond the G20, China can use its leadership role within the New Development Bank or the Asian Infrastructure Investment Bank to incorporate low-carbon support in these institutions. 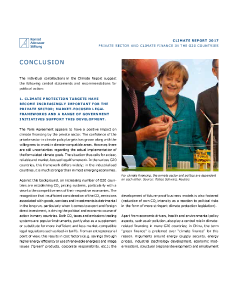 The individual contributions in the Climate Report suggest the following central statements and recommendations for political action: 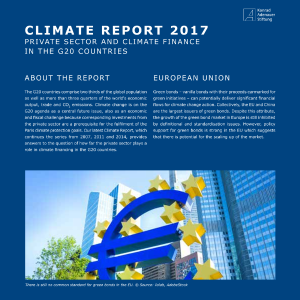 Green bonds – vanilla bonds with their proceeds earmarked for green initiatives – can potentially deliver significant financial flows for climate change action. Collectively, the EU and China are the largest issuers of green bonds. Despite this attribute, the growth of the green bond market in Europe is still inhibited by definitional and standardisation issues. However, policy support for green bonds is strong in the EU which suggests that there is potential for the scaling up of the market. 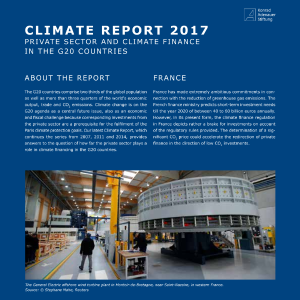 France has made extremely ambitious commitments in connection with the reduction of greenhouse gas emissions. The French finance ministry predicts short-term investment needs till the year 2020 of between 40 to 60 billion euros annually. However, in its present form, the climate finance regulation in France depicts rather a brake for investments on account of the regulatory rules provided. The determination of a significant CO2 price could accelerate the redirection of private finance in the direction of low CO2 investments. 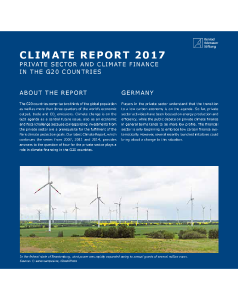 Players in the private sector understand that the transition to a low carbon economy is on the agenda. So far, private sector activities have been focused on energy production and efficiency, while the public debate on private climate finance in general terms tends to be more low profile. The financial sector is only beginning to embrace low carbon finance systematically. However, several recently launched initiatives could bring about a change to this situation. 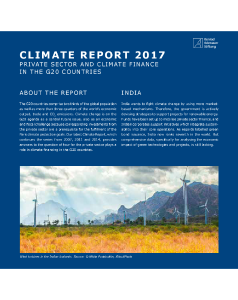 Climate Finance and the Private Sector in G20 Countries

India wants to fight climate change by using more market-based mechanisms. Therefore, the government is actively devising strategies to support projects for renewable energy. Funds have been set up to mobilise private sector finance, and Indian corporates support initiatives which integrate sustainability into their core operations. As regards labelled green bond issuance, India now ranks seventh in the world. But comprehensive data, specifically for analysing the economic impact of green technologies and projects, is still lacking. 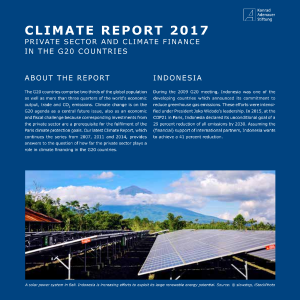 During the 2009 G20 meeting, Indonesia was one of the developing countries which announced its commitment to reduce greenhouse gas emissions. These efforts were intensified under President Joko Widodo’s leadership. In 2015, at the COP21 in Paris, Indonesia declared its unconditional goal of a 29 percent reduction of all emissions by 2030. Assuming the (financial) support of international partners, Indonesia wants to achieve a 41 percent reduction.