The current ruling centre-left coalition, shaken by corruption allegations, is seeking re-election in the upcoming voting. Latest election polls show that the leading party, the Social Democrats, is still in the pole position in spite of a gradual decline of the ratings. The Lithuanian Peasant and Greens Union, which did not pass the 5% threshold in 2012, could become a major player as it firmly sits in second place. The rising support for the Peasant and Greens Union opens up new opportunities for coalition building.
4 de octubre de 2016 Obtener información sobre pedidos 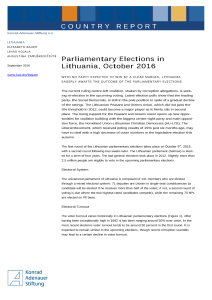