This paper assesses the potential of a partnership between NATO and Brazil, based on interviews with over twenty high-level experts on Brazilian foreign policy. Because building international partnerships has become a vital task of NATO and since Brazil is seeking to increase its influence in global politics, senior NATO officials have called for the Alliance to reach out to Brazil. The paper argues that NATO would be unlikely to succeed in establishing a genuine partnership with Brazil because Brasília’s foreign policy-makers envision a world order different from that for which NATO stands.
Pondelok, 2013, októbra 21 - 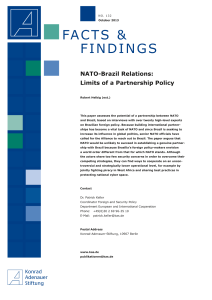