The 72nd World Health Assembly (WHA) took place from May 20th to 28th, 2019 in Geneva against the background of diverse developments: on the one hand, positive developments in Universal Health Cov-erage and in fighting against diseases like malaria, on the other hand, the smoldering Ebola crisis in the DR Congo is a matter of concern. In addition, there were a number of controversial debates, among others on the resolution on the transparency of prices for medical and health products. Some (geo) political conflicts cast their shadows on the discussions during the WHA.
June 5, 2019 Ordering Information

Every year in May, the World Health Assembly is held as the highest decision-making body of the WHO. The Assembly composed of ministers from the 194 member states, determines political priorities of the WHO, approves its working programme and its budget and is responsible for the election of its Director-General. From the German side, the Federal minister of Health, Jens Spahn (CDU), participated in the WHA.

The Ebola epidemic, which is mainly concentrated on the region of North-Kivu in the DR Congo, is still not under control[1]: among the major obstacles there is still the instable security situation in general and the precarious condition of the local health staff in particular. Since January there were dozens of attacks and some people lost their lives. In his opening speech, the General Director of the WHO Tedros Adhanom Ghebreyesus criticized the politicization of the crisis. Concrete decisions about a vaccination offensive were taken and the efforts started already during the last few weeks are to be intensified. The US-American David Gressly was appointed as UN Ebola Emergency Response Coordinator[2] and was asked to start immediate talks with the key actors in the region with the goal to improve the security situation for the local health staff.

Germany is one of the countries which are most strongly committed to the fight against Ebola. At the margin of the World Health Assembly, the Federal government pledged additional funds of about 10 million Dollars for this purpose. The United Kingdom is ready to offer additional funds, and it seems that Sweden is also considering committing itself to more financial means. More resources are urgently needed because a funding gap of around 60 million Dollars is fundamentally threatening the success of the Ebola mission. Apart from Germany it is mainly Japan, Australia, South Korea and Great Britain that are committed to the fight against Ebola, but also other actors like the vaccination alliance Gavi and the Gates foundation. Despite positive developments last week (higher numbers of vaccinations, fewer reported cases) it is yet too early to speak of a change of trends.

Although the World Health Assembly likes to consider itself as a global forum which concentrates on issues and looks beyond “petty politics”, (geo) political conflicts played an obvious role during the WHA:

For the third consecutive year, Taiwan was not invited to the World Health Assembly – upon the pressure from China. Discussions about a restoration of Taiwan‘s observer status at the Assembly failed. The US-representative Alex Azar regretted explicitly the exclusion of Taiwan. Other countries like Australia, Japan and Canada are also in favor of including Taiwan. Federal minister of Health, Jens Spahn, indirectly referred to the issue by stressing that health for all meant that there should be no white spots on the map. A delicate point was that before the Assembly Taipei had declared its readiness to support the fight against Ebola with one million Dollar.

USA (and others) vs. Venezuela

During the first days several strong battles of words happened between the representatives of Venezuela and the USA, accusing each other mutually for the precarious health situation in the country. To demonstrate their protest against the Venezuelan representative of the Maduro regime, for parts of the sessions a group of 20 delegations left the Assembly, including the USA, Brazil, Argentina, Chile and Peru.

Like last year, the Palestinian territories with the support of a group of Arab countries, proposed a controversial resolution on the health situation in the Palestinian territories and the Golan Heights making in fact Israel responsible for the deficits in the health supply of the population, among others in the Gaza strip. Despite heated discussions, the resolution was adopted by a great majority of 96 votes against 11 (with 21 abstentions and 56 delegates absent). Apart from Israel, the USA, Australia, Canada, Brazil, Guatemala and Honduras voted against the draft as well as the four EU countries, the Czech Republic, Hungary, the United Kingdom and eventually also Germany – while it had been abstaining last year. Other EU member states abstained or even voted in favor of the resolution, like France, Belgium or Sweden. In the course of the debate, Germany, Canada and Great Britain clearly criticized the politicization of the WHA: after all, this was the only resolution during the WHA which was directed against a particular country, despite humanitarian disasters in countries like Syria, Yemen and Venezuela. Already two weeks before, on the occasion of the 70th anniversary of the acceptance of Israel into the United Nations, Germany had regretted that „Israel is still today criticized, treated unilaterally and excluded in the bodies of the United Nations”.[3]

the most controversial issue was the „transparency resolution“ proposed among others by Italy for more transparency on the prices for medicinal products. Supporters of the resolution regarded it as an important means in favor of fairer medicine prices. Among the proponents of the motion were apart from the initiators also some EU member states (like Portugal, Slovenia or Spain), the African group as well as states from Latin America and South East Asia and a broad alliance of NGOs. Critics of the resolution – in particular Great Britain, Germany and the Scandinavian countries – pointed to the possible negative consequences on research and development. In the case of Germany, an additional argument was the incompatibility of the resolution with the German regulation on medicine discounts. After tenacious negotiations, a toned-down version was approved on the last day of the WHA with the support of the USA. However, Great Britain, Germany and Hungary „dissociated“ themselves from the final version – an unusual incident for the WHA. For other countries like Thailand, the resolution did not go far enough. The majority of countries and WHO-Director General Ghebreyesus celebrated the resolution nevertheless as a “milestone”.

The accompanying circumstances were indeed a matter of concern and even some of the supporters criticized the procedure: they criticized the limited preparatory time which was considered as too short in view of the complexity of the issue and the far-reaching consequences of the resolution. In addition, they criticized the fact that Italy as initiator had not sought the agreement of Germany, Great Britain and other countries as usual. This would have been possible in the Executive Council of the WHO where Italy is also represented. For Berlin as well as for London, whose countries are principally among the most committed actors in the area of Global Health, these procedural shortcomings were among the main reasons for distancing themselves from the resolution. What caused additional annoyance, was the intensity of campaigns from the side of some of the non-governmental organizations before and during the negotiations. Some countries deplored that their negotiators had been put under pressure in an unacceptable manner, for instance by spreading rumors and half-truths about the state of the negotiations and by publishing the names of the negotiators on the Internet. Some observers considered this to be the reason why several of the initially skeptical countries finally did not dare to expose themselves as opponents of the initiative. This led to a discussion during the Executive Council of the WHO on May 30 and 31 about the future interaction with NGO actors in the framework of the WHA.[4]

Over the last few years, progress towards Universal Health Coverage had been made. In this context, Ghebreyesus mentioned examples from countries like Kenya, India, South Africa, Egypt, El Salvador, Greece and the Philippines[5]. Nevertheless, the challenges remain enormous: globally there is a lack of 18 million professionals in the health sector. More than half of the world population has no access to basic health services. During last year, success was made in fighting diseases like Malaria.

In addition, the WHA adopted the program budget for 2020/21 with an 11% increase. Germany is the fourth biggest contributor.

Other themes were the support for local production of medicinal products, a global strategy on health, environment and climate change as well as an action on the issue of health and migration.

The reform process within WHO initiated by Director General Ghebreyesus to improve its capacity for action, did not play a prominent role. Many countries, among them Germany, support the request for a reform of WHO in principle. However, the many changes introduced by Director General Ghebreyesus lead to occasional frictions and questions. Some of the measures are contested by representatives from within and outside of WHO.

The role of Germany and the EU

Independent of the controversy about the transparency resolution, Germany is still perceived as a central actor on the issue of „global health“ - as initiator of new initiatives, as supporter of reform processes but finally also for the urgently needed financial support. This remains essential for the work of WHO, not least in the Ebola crisis.

Usually, EU member states coordinate their positions in Geneva. This year again, there were a certain number of common EU statements. However, on two of the most controversial questions, no common EU line could be found: the resolution on the health situation in the Palestinian territories and the transparency resolution in which according to the view of several participants Italy as initiator had not used all possibilities for dialogue beforehand.

The next World Health Assembly will take place in May 2020 in Geneva; a new vaccination action plan could be a main issue on the agenda.

From a German perspective, global health remains a central theme. This year a new strategy on global health policy will be presented. Questions of global health services will certainly also play an important role during the German presidency of the EU council in the second half of 2020.

[3] Declaration oft he Federal government on the 70th anniversary of the acceptance of Israel to the United Nations , 11th May 2019: https://www.auswaertiges-amt.de/de/newsroom/70-jahre-israel-vereinte-nationen/2217504 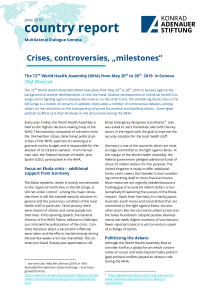