by Arbeitskreis Junge Außenpolitiker
Donald J. Trump’s election as president of the United States of America has prompted an uproar in international politics. What does that mean for German-American relations? In a series of threes papers, the KAS Working Group of Young Foreign Policy Experts comes up with a number of suggestions as to how to react. This second paper deals with the future of multilateral cooperation based on the examples of health, climate and UN reform.
December 22, 2017 Ordering Information 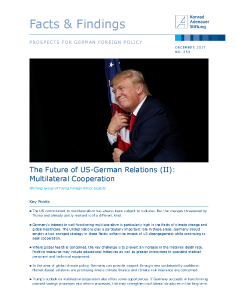