The day of the first primary election on 1 February 2016, heralds the second phase of the election campaign for the US presidency. This also fundamentally changes the criteria underpinning the election campaign. The first phase was all about making yourself known. Now the key issue is that voters actually go to the polls! It no longer suffices to name favourites in surveys and to attend election rallies every now and then. The current phase of primary elections affords many opportunities for candidates to turn the tide. National surveys, which to date often determined the view on the candidates say little about candidates’ chances in the primary elections. Voters now need to cast their vote in a complicated primary election system that is regulated differently depending on the federal state, go to the polls and, in some cases, invest a lot of time. Delegates are elected during the primary elections who nominate candidates of the respective party at large party congresses at the end of the second phase in late July. During the third phase, candidates nominated from the Democratic and Republican parties compete against one another.

The Konrad-Adenauer-Stiftung supports this truly nail-biting election campaign with background information, analyses and events. To this end, we predominantly rely on our colleagues in Washington D.C and Berlin. We also offer other perspectives, too. 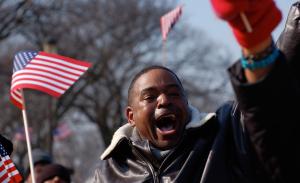