The sixth national and provincial elections of South Africa failed to surprise. The ANC won 57.5 percent of votes and hence 230 of the 400 seats in the national parliament. As a consequence, the ANC leader, Cyril Ramaphosa, will rule the country for the next 5 years with a comfortable majority. Compared to the 2014 election results, the ANC lost 4.65 percent and continues its 15-year downward trajectory. That the perennially ruling party did not lose more votes is almost certainly thanks to Ramaphosa, whose popularity extends beyond party lines. He was the right candidate for the ANC, given his ability to act as statesman on the global stage and yet be in tune with his grassroots supporters in the townships. In addition, he managed to distance himself from his predecessor Jacob Zuma and his corruption scandals. Voters accepted Ramaphosa’s claims that he would fight corruption and embezzlement while re-building the integrity of state institutions. They will hold him to these promises in the next legislative period.

The positive effect of Ramaphosa on the electoral fate of the ANC can be deduced from the fact that the ANC fared significantly better in the national than provincial ballot. Some voters expressed their support for a national government under Ramaphosa’s leadership on the national ballot, while voting against the ANC provincially. Of ten million ANC voters, at least 640,000 split their vote in such a way. “Vote splitting” may indicate growing democratic maturity in the electorate, as it requires a thorough understanding of structure of the electoral system. Previous elections did not show such a scale of split voting.

You can download the complete country report as a PDF file.​​​​​​​ 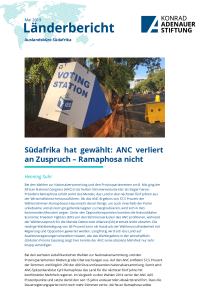