The landmark decision the Summit will be remembered for is the establishment of the Enhanced Forward Presence (EFP), which establishes a constant rotational (and thus “persistent”) presence of a total of four multinational allied battalions in Poland and each of the Baltic republics. With its decision, NATO closes the military gap between “old” and “new” allies by establishing a credible deterrence posture for its Eastern members.
Streda, 2016, októbra 5 - 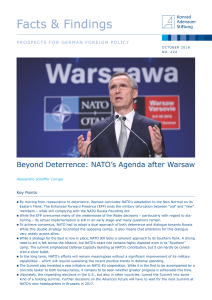