autori Karsten Grabow
Despite severe losses the two Christian democratic parties attained important strategic goals. They remained as the strongest political forces in Germany. There is no winning coalition without them possible and Angela Merkel will be Germany’s next chancellor. The Social democrats gained 20.5 per cent of the votes. This is the worst result the Social democrats got in an election since the foundation of the Federal Republic. Largest gains got the Alternative for Germany (AfD). The party received 12.6 per cent and will form the third-largest group in the 19th German Bundestag.
Utorok, 2017, septembra 26 - 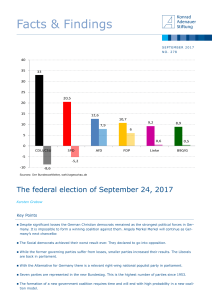