The survey report examines the impacts of the ongoing U.S.–China trade conflict and the resultant geopolitical changes on seven countries in Asia Pacific: Australia, China, India, Indonesia, Japan, Kazakhstan and South Korea. There was widespread consensus among the experts interviewed for this study that the U.S. –China trade conflict was having only minor direct impacts on the energy security or decarbonisation of these countries. Despite this, various secondary effects that could impact the energy markets in Asia Pacific and countries around the world were identified.
April 7, 2020 Ordering Information

This report explores the impacts of the recent U.S.–China trade conflict and the resultant geopolitical changes on seven key-impact countries in Asia Pacific: Australia, China, India, Indonesia, Japan, Kazakhstan and South Korea. They represent a combined population of almost 3.5 billion people and were chosen as representative of their region or as countries of particular importance.

To investigate this topic, GlobeScan conducted a thought leadership study using 44 expert interviews, with a minimum of five from each of the seven focal countries. Respondentswere identified from a range of sectors – academia, private institutions, government, and non-governmental organisations. Of the respondents, 41 of the 44 were nationals of the country about which they were speaking, and the remaining respondents had been focusing their work and/or research on the country for more than ten years. In order to speak freely about governments or institutions with or for whom they work, we elected to anonymise the respondents. The interviews were conducted via internet calls between 19th November and 6th January and lasted an average of approximately 45 minutes.

We asked experts what, if any, impacts they had observed in their respective country as a result of the U.S.–China trade conflict; these impacts could be positive or negative, direct or indirect, long-term or short-term, potential, or realised impacts. We also asked each expert to predict what impacts may occur in the future from this trade conflict if it were to continue, worsen, or improve. There was widespread consensus among the experts interviewed for this study that the U.S. –China trade conflict was having only minor direct impacts on the energy security or decarbonisation of the seven countries assessed in this report. The reasons they perceived that such a major global event was not dramatically affecting the energy sectors of these countries were:

The long-term nature of energy contracts and decarbonation strategies shields countries from volatility brought about by trade conflicts such as this.

• Energy security has always been a high priority for countries and decarbonisation is relatively less linked to international affairs. Most countries have taken adequate measures to have a high level of energy security for the near future.

• Domestic issues, such as a country’s natural resource endowment, are of higher importance to energy security and decarbonisation than a trade conflict in which the country is not directly engaged.

• Maintaining good relationships with both the U.S. and China is important for most countries, and it is therefore necessary for them to remain neutral.

Although the direct impacts and potential impacts were perceived by the experts interviewed to be limited, they identified various secondary effects that could impact the seven focal countries in Asia Pacific and countries around the world:

• The restriction of trade caused by tariffs causes a restructuring of the international trade market.

• In a more volatile and uncertain world, with a greater degree of protectionism and unilateralism, transitioning to renewable energy will be more difficult.

• In the long term, policy-makers may use the trade conflict to argue for a return to certain forms of energy generation such as coal or nuclear power. 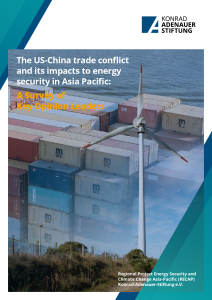