Here we are presenting analyses, reports and studies by KAS and other NGOs in the region.

Worldwide report, including research on Croatia, Bulgaria and Romania

Report | June 2018 | Reuters Institute for the Study of Journalism

Report on the media freedom in Bulgaria

Analysis of the Albanian media landscape

Back to the Drawing Board: Crafting the ideal journalism curricula for South East Europe

The research aimed at creating a set of indicators for evaluating the study programs in journalism in the SEE countries.

Ownership, financial models and programme diversity of the most influential TV channels in Macedonia, Croatia and Slovenia

National report on potential risks to media pluralism in Bulgaria

Number of (un)employed journalists in Croatia?

Fairpress is publishing a series of articles about the real state in the Croatian media sector. The first topic is related to the analysis of records of the number of (un)employed journalists.

The IJM is designed to equip journalists with core investigative reporting skills and to support watchdog journalism in difficult environments.

The book provides insights into the students’ perspective on journalism education at universities in South East Europe.

The book presents existing recommendations of international organisations and new trends of reporting.

The survey is based on an extensive survey conducted with 465 Albanian students of journalism during 2015.

Two decades of bad management, political influence and a polarised society have brought Bosnia's three public TV stations to the verge of collapse.

The monitoring of the Romanian media landscape reveals the trends in the political reporting in Romania.

Only 12 percent of Bulgarians believe in the independence of media. According to a representative survey commissioned by the Konrad-Adenauer-Stiftung, trust in the media has further decreased.

Reports on media ownership and financing in Albania, Bosnia-Herzegovina, Serbia, Macedonia and Montenegro

The survey analyses the working conditions of journalists in Albania, Bosnia-Herzegovina, Former Yugoslav Republic of Macedonia, Montenegro and Serbia

Opinion poll on trust of Bulgarians in the media

Representative survey on behalf of the Konrad-Adenauer-Stiftung shows crisis of confidence in media and political communication: 59 percent of the population of Bulgaria do not consider the media to be independent. Many are undecided and only 17 percent believe reporting is free.

The Balkan Media Barometer 2014 follows the tradition of the Media Barometers that were launched by Friedrich-Ebert-Stiftung (FES) in 2004. The study was conducted in Bulgaria for the first time in 2012.

Journalist = entrepreneur, a model of the future

In the digital era, online media and entrepreneurship are becoming more and more important for journalists in South East Europe.

Sustainable policy and media freedom are central on way to EU

The EU and its enlargement are complex issues – both for journalists and the media audience. Therefore, the KAS Media Program South East Europe organises

an information seminar once a year.

Journalists have more and more rights to access information – but when it comes to exercising these rights, authorities are often uncooperative.

The development towards more transparency in South East Europe has still not been completed yet.

Media Studies is an interdisciplinary journal on media, communications, journalism, and public relations, within each field’s cultural, historical, political and/or economic contexts.

The Right to Information in Serbia and Bulgaria

In post-communist states where democratic standards first had to be established, the laws relating to freedom of information are of particular significance.

Publication on media freedom in Europe under the aspect of technical surveillance carried out by public and semi-public institutions.

Only 20 percent of Romanians believe in the independence of the media. That is the result of a public opinion poll conducted by the independent agency Market Links and commissioned by KAS.

The Serbian Access to Information Law is on average being assessed as "good" (2 on a scale from 1 to 5) in a recent KAS survey among journalists in Serbia.

Summary of the 2013 annual report of the Media Monitoring Lab of Foundation Media Democracy.

The monitoring report summarises the findings of an analysis of over 12,000 articles in four daily newspapers and four TV channels.

PR of parties enhancing its profile – profession still in development

A survey by the KAS Media Program shortly before had highlighted the progress made in political PR: today virtually all of the parties affiliated to the European People‘s Party (EPP) in South Eastern Europe have a designated communication division which is not confined only to issuing press releases.

Whether the media can exercise their control function on the political stage is not only dependent on the commitment of journalists or economic factors. Media law and self-regulation are vital for media freedom and pluralism.

The media monitoring showed a significant change in the political reporting after the protests in February 2013. Politicians of the former government that used to be judged in a highly positive way, quickly lost media support after their resignation.

How South East Europe’s media deal with the past

Coming to terms with a country’s political past is closely linked to the mass media, as they are the key to changing public opinion.

The Media Barometer is analytical tools designed to measure the state of media developments in a national context.

The Internet – Freedom without boundaries

Analysis of comments on portals and recommendations on better communication. 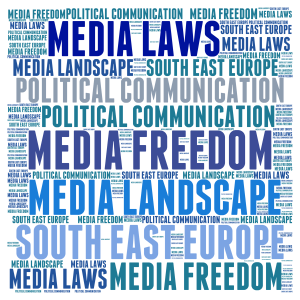