In short: Between Crisis Management and Sustainability

An Interim Review of the EU’s Migration and Refugee Policy

Since the beginning of the migration and refugee crisis, the EU has made considerable progress withshort-term crisis management. The numbers of irregular migrants have significantly decreased, theadministrative chaos is resolved and humanitarian emergencies are overcome. The EU is no longer incrisis mode. Yet, several areas – especially the Common European Asylum System – are still in need ofimprovement.
May 24, 2018 Ordering Information

The highest number of refugees worldwide was recorded in 2016. Today, more than 65 million

people – nearly twice as many as 1997 – are in need of protection. People predominantly flee from

Syria, Afghanistan, Iraq and Sudan. The main receiving countries are located in the EU’s immediate

The impact of war, terror, forced displacement, hardship and lack of prospects in the Middle East was

clearly felt in the EU even prior to 2015. Over the past few years, the number of irregular border

by the EU migration and refugee policy, the figure decreased to approx. 511,600 people. This trend

continued during 2017: 201,300 irregular border crossings were recorded. The number of asylum

applications developed in a similar way, but with some delays. Many of those who came were in

Despite the decline in irregular migration to the EU, the number of people in need of protection

across the world remains high. The EU‘s support continues to be essential in finding solutions.

Significant progress – with room for improvement

The EU’s external borders have been strengthened. The rapid expansion of the EU border

agency Frontex into a European Border and Coast Guard, is a success. There are now more than

1,400 EU security officials in operation – alongside the over 100,000 national border guards. Moreover

a reserve of 1,500 EU border guards was formed. In addition to the financial and personnel

increases, the competences of the EU border guards have been expanded. There are shortcomings,

however: The coordination of return-operations with member states needs to be improved, and

some member states still need to fulfil their commitments, especially with regard to the equipment.

But in the long term a further developing of the Border and Coast Guard is indispensable. This

would require higher funding. A total of approx. 2 per cent, provided in the upcoming EU’s multiannual

financial framework would be necessary to live up to the task.

In 2015, the EU set up hotspots in Greece and Italy as reception and registration centres. Here

national institutions cooperate closely with EU authorities. In a first step, the identification and

registration of all incoming migrants is carried out. The second step enables migrants to apply for

asylum. If protection is granted, the refugee leaves the hotspot. If an application is rejected, it can

be legally disputed before voluntary repatriation or deportation. In practice, however, legal standards

are often not complied with when it comes to conditions of admission, legal assistance or the duration

of the proceedings. Urgent improvements are needed.

The EU-Turkey Agreement is good for all parties. Scarcely any agreement has been subject

to as much criticism as the EU-Turkey Agreement dated 18 March 2016. However, both sides have

benefited from cooperation in the refugee policy. Protection and living standards of refugees in

Turkey have been improved and irregular and risky migration to the EU confined. But some things

need to be changed. This includes the creation of channels for coordinating and implementing the

agreement (for example via “ombudspersons”), and determining an admission quota for refugees

from Turkey to the EU.

Long-term plans – patience, consensus and coordination are a must

solidarity and fairness as the standards still vary widely. Although important reforms have been

passed, consensus is yet to be reached on the Dublin Regulation. Despite the fact that it is necessary

to find a compromise acceptable to all member states, the future system will not be able to avoid

a binding distribution of asylum seekers among all EU countries.

is in the process of development. It is specifically targeted towards countries of origin in Africa.

The partnerships aim at promoting positive developments in the countries of origin and transit,

and thereby reduce migration pressures in Europe. This is to be achieved by joining new forces,

refocusing EU policy as well as the provision of funds. The introduction of new legal migration paths

which shall be advantageous for Europe, is part of this endeavour.

Migration, forced and voluntary, continues to increase on a global scale. The measures adopted

over the past few years gave the EU room for manoeuvre. It is imperative that this time is used

taken and improve them where necessary. The summit of the European Council in June 2018 should

be used to achieve a breakthrough on difficult issues (above all the Dublin reform). In doing so, the

EU will demonstrate the capacity to act in a central policy area before the European elections in 2019. 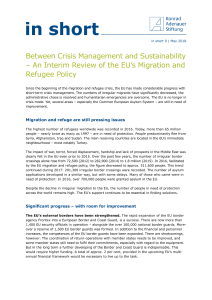