Into the 70th Anniversary of Cambodia-US Relations and Beyond: The Rebalancing Dilemma and New Era of Relations

This year marks the 70th anniversary of Cambodia-US Relations and is therefore an appropriate time to re­view this enduring relationship — particularly in the context of an increasingly unpredictable internation­al setting. At this juncture, both sides need to reas­sess their bilateral relations with a view to revitalizing their efforts to move toward more constructive en­gagement, leaving aside historical baggage that has weighed on potentially productive collaboration that could reinforce a new era of partnership.

Although US-Cambodian diplomatic relations were first established in 1950, they were severely affected in the Cold War era by the vastly differing foreign policies of Phnom Penh and Washington D.C. America’s deep involvement in the Vietnam War, including its secret bombings over Cambodia from 1965 to 1973, and the mountain of US loans racked up by Phnom Penh in the early 1970s, further strained the bilateral relationship, which has seen fresh tensions arise in recent years.

In the past two years, the US has expressed deep con­cern over the suppression of opposition parties and Cambodia’s growing economic reliance on the People’s Republic of China (PRC).

The Cambodian government banned the largest op­position party, the Cambodia National Rescue Party (CNRP), in late 2017, enabling a sweeping victory for the ruling Cambodian People’s Party (CPP) in the 2018 National Assembly election. As a result, the Trump ad­ministration and Congress imposed sanctions on top Cambodian officials in an effort to pressure the Cam­bodian government into restoring democratic rights and dropping criminal charges against opposition leaders.

Throughout, China’s seemingly unconditional sup­port for the Cambodian government raised concerns in Washington D.C. about Phnom Penh’s readiness to accommodate or even actively support Beijing’s posi­tions on key regional issues, including territorial dis­putes in the South China Sea. The US has also grown anxious over reports suggesting that Cambodia would cede its sovereignty to allow China to establish military bases in the country, despite official denials by the Cambodian government.

Notwithstanding these issues, the US continues to remain engaged with Cambodia. The foundation of a new approach to engagement goes back four decades, when the US opposed foreign military intervention in Cambodia after Vietnam invaded the country, ousting the Khmer Rouge regime. In the 1980s, the US sup­ported efforts by the ASEAN to achieve a comprehen­sive political settlement of the so-called Cambodian problem. This was accomplished on October 23, 1991, when parties at the Paris Conference on Cambodia signed a comprehensive settlement.

From 1993 until relatively recently, US-Cambodia rela­tions for the most part improved. The lifting of a Con­gressional ban on direct assistance to the Cambodian government made direct technical assistance feasible. Data from USAID indicates that the US provided rough­ly $235 million in assistance related to good gover­nance, democracy, and civil society between 1993 and 2018. For FY2018, the US provided an estimated $79.3 million in foreign assistance to Cambodia, a decrease of 10% compared to FY2017. However, for FY2019, the Trump administration slashed annual assistance to Cambodia by nearly 75% compared to FY2017.

US priorities and foreign assistance efforts in Cambo­dia have largely focused on strengthening democrat­ic institutions and norms, promoting the rule of law, increasing bilateral trade and investment, supporting economic growth, reducing poverty, and improving public health. The US government has supported de­mining and related activities in Cambodia, which is among the countries most affected by unexploded ordnance (UXO). The US also sought to militarily en­gage with Cambodia, including through US naval port visits, US military assistance and training, and joint ex­ercises.

The arrival of a new US ambassador to Cambodia in late 2019 added fresh impetus to the bilateral relation­ship. Being a distinguished career diplomat, Ambas­sador Patrick Murphy has been active in meeting with members of the Cabinet and engaging with civil soci­ety and non-government organizations and academia to encourage open and frank discussion on efforts to strengthen friendship and cooperation between the two countries. He has indicated his priority is to pro­mote democracy, human rights and fundamental free­doms to advance US interests in Cambodia.

Reinforcing this new momentum, Cambodia’s Foreign Minister Prak Sokhonn sent signals of the govern­ment’s sincerity by declaring strong support for the U.S.-led Lower Mekong Initiative development pro­gram and saying that Phnom Penh was “looking for­ward” to working with the incoming US ambassador. For both sides, Ambassador Murphy’s appointment appears to represent an opportunity to improve ties after a rapid downward spiral over the last few years.

Another positive note emerged recently at a US-ASEAN meeting in August 2019 when US Secretary of State Mike Pompeo praised Cambodia for “protecting its sovereignty,” putting a positive spin on the Cambodian prime minister’s denial of a deal for Chinese military presence in Cambodia. This was viewed in Phnom Penh as a step in the right direction.

As we celebrate the 70th anniversary of Cambodia-US relations, I would like to make a few suggestions to fur­ther improve the US-Cambodia relations.

First, US-Cambodia relations in the new era of partner­ship should rest on the principle of mutual respect and common interest. This relationship must also be nur­tured and cultivated not only between the two govern­ments but between people of both countries, taking into consideration the difference in levels of develop­ment, the relative position of each country in global af­fairs, and cultural aspects of the two countries as well as in the context of US-China competition.

Second, Cambodia and the US should engage in sin­cere and frank discussions about the root causes of obstacles in their troubled relationship and seek ways to address issues vital to both sides through construc­tive dialogue and consultation. This could best be ac­complished by trying to resolve disputes through quiet diplomatic means rather than resorting to highly pub­licized “naming and shaming” of one another.

Third, each country should not blame the other or take the credit for success or failures that contribute to their national development process in respective eco­nomic, social, or political spheres. Instead, they should find ways to complement each other based on mutual respect and understanding. Each country should be responsible for its own actions. Fourth, to be a good friend to the people of Cambodia, the US could help reconstruct and develop the country by imparting technical assistance and know-how, to do the “must be done” in correct and effective ways. In so doing, the US could help improve the human resourc­es needed for the nation-building process.

Fifth, the US, being a superpower and an advanced na­tion, must serve as role model for smaller and less de­veloped countries, such as Cambodia. In other words, the US should be influencing Cambodia’s development by way of example, rather than by way of dictating any specific principles, be it democratic values or respect for human rights. The US should avoid being seen as lecturing on American principles that may not adapt automatically or immediately to societies such as Cam­bodia’s. This process of setting a good example must be a learning process, with clear intentions to improve the weaknesses of the Cambodian side. The US should be prepared to give good advice and offer counsel, but avoid impinging on Cambodian sovereignty and na­tional pride.

Sixth, Cambodia would do well to collaborate with the US in order to overcome major challenges to its dem­ocratic development and sustained economic growth. The US has shown consistent interest in seeing im­provement on issues related to good governance, rule of law, transparency and accountability, as well as stronger state institutions and better education, healthcare and agriculture.

Seventh, in recognition that strategic competition be­tween China and the US poses difficult questions for Cambodia and other regional countries, the US should avoid pushing Cambodia deeper into the sphere of China’s influence. It would be best for the US to avoid a zero-sum game approach in presenting itself as Chi­na’s strategic rival, as it will only trigger more assertive Chinese policies in the region. China and the US have each played important roles in boosting Cambodia’s development, as have other countries including Japan, South Korea, Australia and the EU. Phnom Penh must find a way to balance relations between the two key powers to maximize its economic, diplomatic, and po­litical returns. In particular, it needs to avoid giving the appearance of teaming up with China against the US.

Eighth, with due respect to Cambodia’s principles of sovereignty and independence, the US should not en­gage Cambodia through the Chinese spectrum. Rath­er, it should see China and Cambodia as two separate entities, and stop adjusting its Cambodia policy ac­cording to the level of Chinese engagement. Instead, the US should recognize that Chinese aid to Cambo­dia, and to Southeast Asia as a whole, may eventually prove beneficial for US investors. Cambodia’s attitude toward Washington’s sanctions demonstrates that economic cooperation is key to engaging Cambodia. This approach may well be the best way to prevent Cambodia from choosing China over the US.

Finally, Cambodia, as a country, should maintain its neutrality by not siding with any external powers or creating mistrust or conflict. Small countries like Cambodia would do well to be a friend to all coun­tries, including neighbors as well as the major powers, and genuinely engage America in the real process of regional integration. In this sense, Cambodia and the U.S. should avoid being seen as spoilers to each oth­er’s interests when it comes to protecting and advanc­ing their respective national security interests. In this respect, Cambodia depends largely on a stable and peaceful regional security environment, which requires careful balancing among the big powers. Cambodia should also approach its relations toward the U.S. and China from the perspective of its position within ASEAN. Seeking peaceful coexistence with China alone cannot guarantee long-term stability for Cambodia since there are deep animosities between China and some other ASEAN member states, provoked mainly by China’s contentious sovereignty claims in the South China Sea.

For Cambodia, national interest is generally under­stood as economic development and poverty reduc­tion, and its diversified foreign policy should aim to serve this purpose. Securing development assistance from all friendly countries, promoting exports and at­tracting foreign direct investment are the means to achieving these goals.

The US has played a significant role in meeting Cam­bodia’s needs in the process of nation building. Deep­er trust and good relations between the two would significantly contribute to a vibrant and active Cam­bodian neutrality, and can secure the country’s sov­ereignty and independence. This, in turn, would serve US interests throughout the region. US development assistance and engagement should also aim to assist Cambodia to develop a strong sense of balance in its external relations.

Cambodia should understand American concerns about China’s intentions in Southeast Asia. The US should find ways of pulling Cambodia out of China’s orbit by offering more incentives instead of pushing Phnom Penh deeper into Beijing’s arms by antagoniz­ing the government or making statements that could be viewed as attacks on the government and its leader. 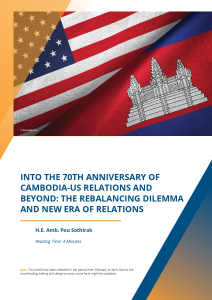 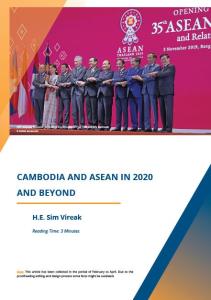 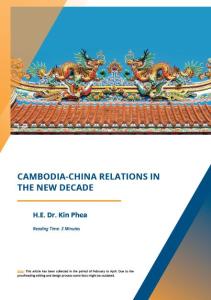