The Failure of Reconstruction in Mosul: Root Causes from 2003 to the Post-ISIS Period

This report from the KAS partner organisation IRIS addresses the root causes of the failure of reconstruction in Mosul between 2003 and the present.

Since the first days of the post-2003 era, reconstruction and overall responsiveness to the local populace have taken a backseat to a chaotic, violent struggle for control over the city between many different actors, including Sunni Arab political factions, the two main Kurdish blocs, the Americans and Coalition, the Prime Minister’s Office, the Iraqi Security Forces, and most recently, the Popular Mobilization Forces and their political proxies. These political/military entities are often internally divided and shift alliances quickly, rendering the basic structure of power and governance unclear even to political insiders. This competition and incoherence since 2003 to the present day has resulted in pervasive insecurity and a depletion of the resources allocated for development, leaving the majority of Mosul’s citizens feeling left out of a high-stakes game.
15. Juni 2020 Bestellinformationen 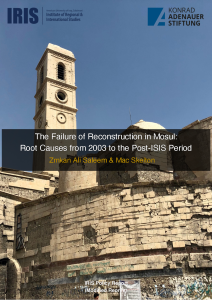