The Integration of Syrian Refugees in Iraq

Exploring Movements and Realities of Syrian Refugees in Iraqi Kurdistan

Syrian families increasingly reside outside camps in contrast to earlier years of displacement. This movement is driven mainly by seeking paid jobs and accessing better services. The majority of Syrian refugees are settled in the the KRI and are not considering returning to Syria, mainly due to the absence of pre-war stability in their areas of origin and their high concentration which offers a support network. Despite a widespread desire to relocate to Europe, only about 20% have firm plans to take refuge in the EU.
14. Januar 2021 Bestellinformationen

This study attempts to investigate how the demographics and realities of Syrian refugees have affected their local integration in Iraq. What reasons facilitate their movement out of camps? What factors facilitate integration into host communities? Therefore, it considers several variables, such as the area of residency (City Center, Urban, Periphery, Camps), income level (Very Good, Good, Medium, Low), educational level, job status on the demand side (Syrian refugees), as well as, availability of basic services, economic opportunities, and socio-cultural factors on the supply side (host community), in order to assess their effect on the scale of local integration.

The study is based on a household survey in both Erbil and Sulaymaniyah. Especially Erbil hosts most Syrian refugees (50.23%) in contrast to Sulaymaniyah, which only hosts 12.78%, testing the influence of the number of refugees as a factor to facilitate or halt integration, as well as other demographic factors. Data was collected for the period 30 August to 26 September and distributed in a stratified sample based on the areas of settlement and identity.

The study is structured into five sections; the first section summarizes sample demographics, the second section explores realities of Syrian refugees in Iraq based on IASC criteria, a third section discusses movement of refugees, a fourth sections assesses the scale of integration, and a fifth section concludes the study with some policy recommendations. 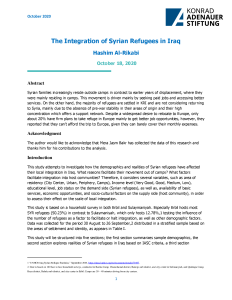 The Integration of Syrian Refugees in Iraq
Herunterladen
Ansprechpartner