von Trygve Olson
Every election is a reflection of the political environment in which the campaign takes place and is an extension of the candidates taking part. The 2010 Senate race in Kentucky, to fill the seat of retiring Senator Jim Bunning, was not an exception. In a conservative democrat state - that typically goes Republicans on the national level - the race presented an opportunity for either party. As is often the case the central question was not who would win, but would the party and candidate with the generic political winds at their back not lose the race.
15. Februar 2011 Bestellinformationen 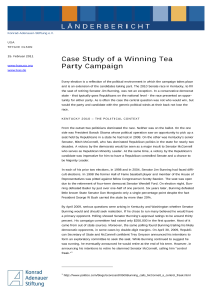