Accompanying Prime Minister Recep Tayyip Erdoğan on his visit to Germany, Minister for EU Affairs and Chief Negotiator Egemen Bağış delivered a speech themed “Turkey-EU Relations: Building the Future Together” at Academy of the Konrad-Adenauer-Stiftung (KAS). 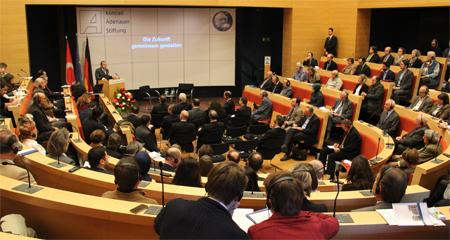 In his speech delivered at the conference entitled ‘Turkey’s EU Membership: Building the Future Together’, organized by Konrad Adenauer Stiftung (KAS) on October 31, 2012, Minister for EU Affairs and Chief Negotiator Egemen Bağış once again reinforced Prime Minister Tayyip Erdogan’s message, given during the opening ceremony of the new Turkish Embassy building in Berlin, that Turkey was striving with determination to achieve full membership to the EU.

In response to the message, Dr. Hans-Gert Pöttering, Chairman of the Konrad-Adenauer-Stiftung, stated in his opening speech that KAS has diligently supported Turkey in its full membership endeavours since the start of the process, noting that he regarded the negotiations as an opportunity for strengthening common values.