Congratulations to the Asian Democratic Leaders' Alliance (ADLA) for the successful launch of the network!
8. Januar 2021 Bestellinformationen 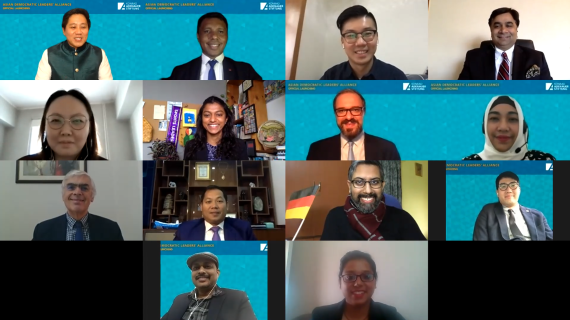 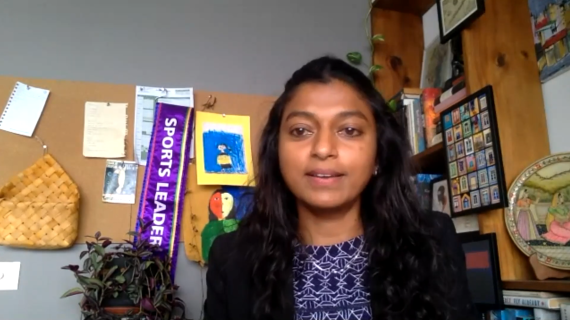 Oath of Office and Pledge of Commitment 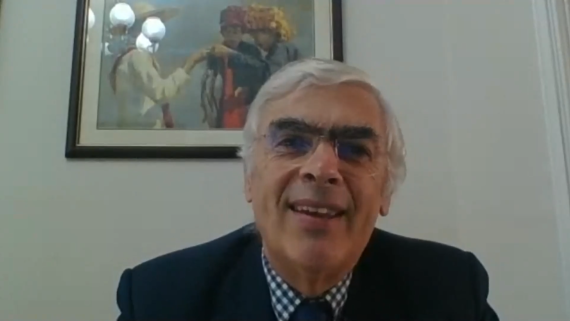 Inspired by the successful celebration of the 1st Konrad Adenauer School for Young Politicians (KASYP) Grand Alumni Meeting held last August 2019 in Penang, Malaysia, the KASYP alumni elected their interim officers who will be responsible in institutionalising, finalising and adopting the bylaws of the network. With this fresh mandate, the members of the steering committee agreed to conduct visioning workshops as part of the preparations before its official launching. The objective of these workshops was to establish the network’s mission and vision statements and produce its constitution and bylaws.

ADLA aims to advance and consolidate democracy in Asia through:

ADLA envisions a society where individuals live with freedom, dignity, prosperity, and peace as a result of democratic governance and leadership.

In addition to these mission and vision statements, the members were also able to approve and adopt the charter or the constitution and bylaws which will become the official basis of the network’s existence and functioning. Furthermore, the KASYP alumni country representatives elected among themselves the first officers of the network’s executive committee. Here are the following KASYP alumni elected to the executive committee:

After a series of workshops and the election of the executive committee officers, the KASYP alumni have agreed to call the newly established network as the Asian Democratic Leaders’ Alliance or ADLA. ADLA is conceptualised on sustaining a life-long engagement platform, “multiplying” the impact of KASYP alumni beyond themselves, to their wider communities and the public at large, and strengthening a support network of like-minded individuals and organizations. Essentially, ADLA will serve both as a “network and a platform” for KASYP alumni to advance and promote democratic leadership and governance in the region, by initiating, leading, and implementing programmes and activities which engage the general public.

In December 12, 2020, the official launch of ADLA was held virtually. The programme started with the official welcome and opening remarks from Mr. Christian Echle, Director of the Regional Programme Political Dialogue Asia. According to Mr. Echle, ADLA is a new platform that is built on the shoulders of KASYP which aims to provide an opportunity for the KASYP alumni to work professionally with other actors in the democratisation of the region and to engage with senior political actors in shaping their political realities towards a more democratic society.

This was followed by the keynote address on the theme “To advance and make democracy work in Asia” with Hon. Eva Abdulla, Deputy Speaker of the People’s Majlis of the Republic of Maldives as the Keynote Speaker. She stressed on the opportunities for ADLA as a global alliance of democratisation. As an alliance, it should demand freedom, civil liberties, and system that will build a prosperous community rooted in tolerance and activism. It must help build a civic-minded society. The perception of democracy as another means to power must stop in Asia. We have to seize these faulty democracies and constantly strive to do better. We need to review our laws, institutions, and leaders constantly. Above all, the alliance should advance and promote a system that is empathetic and responsive. Only an empathetic system can be resilient and that empathy has to be institutionalised and be seen serving the people.

After delivering her keynote address, Hon. Eva Abdulla officiated the oath of office for the elected officers and the pledge of commitment for the all the members of the ADLA board of representatives.

The final talk was on the topic of “Political Leadership” which was delivered by Dr. Wilhelm Hofmeister, the founding father of KASYP. Dr. Hofmeister shared his thoughts that democracy needs political leaders who are committed to its principles. Political leaders play a decisive role in the democratisation process. They should embody specific attributes and characteristics that are aligned to democratic values and principles. One example he emphasised is the observation of Christine Lagarde on the leadership style of Dr. Angela Merkel, the German Chancellor. She observed that Dr. Merkel exhibits four Ds namely diplomacy, diligence, determination, and duty which makes her a model for democratic political leadership around the globe.

The official launch ended with a closing remarks from Mr. Rey Padit, Programme Manager for Political Cooperation of the Regional Programme Political Dialogue Asia, where he challenged the members of the alliance to be the protagonist for freedom, dignity, prosperity, and peace as they start to write the story of ADLA. 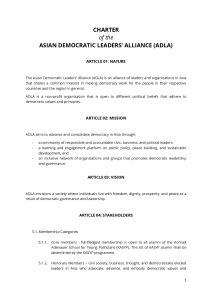