Seventeen participants from Germany and Greece joined the third workshop “Greece and Germany: What Role for Civil Society?” Maximilian Kall, a journalist from Berlin, was the moderator of the panel discussion and the following workshop.
15. Oktober 2013 Bestellinformationen 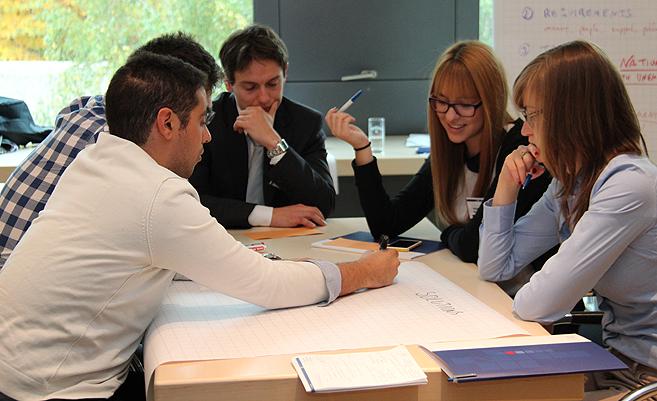 In the workshop session, they produced definitions of civil society, ... 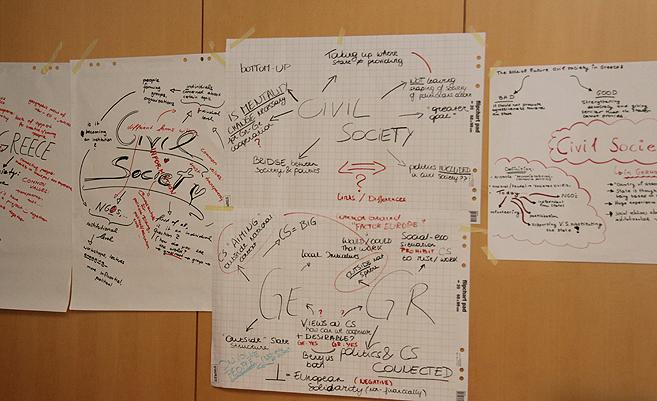 ... assessed the role of civil society in their countries ... 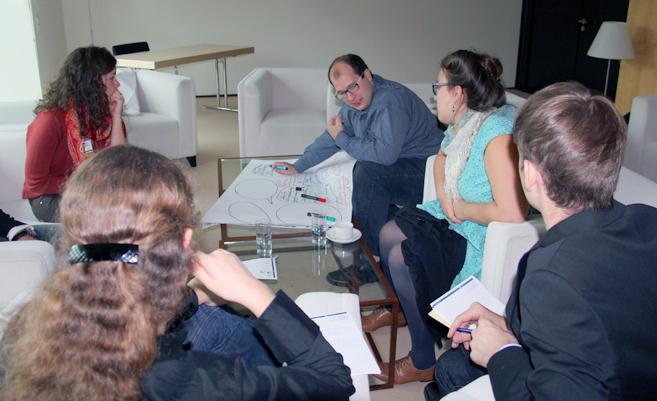 ... and analyzed how civil society could be engaged on a European level.

Stephania Xydia, co-founder of the Athens NGO PlaceIdentity, opened the panel discussion with her talk on Greek civil society and its possible contributions to overcoming the current crisis. Although being referred to as the “Cradle of Democracy”, Greece has to face difficult political and economic challenges. Commensurate with the disappointment in the democratic process, extreme solutions have increasingly entered the political dialogue and have been accepted by parts of the population as a possible solution to the crisis. However, extremist parties, such as Golden Dawn, posed a great threat to Greek society and its political future. One of the biggest problems for Greece was the threat of democratic deficit, Xydia said.

Strengthen the civil society in Greece

As a solution to this initial situation, she proposed a new approach to democracy: “Every age is characterized by its tools”, she asserted. “We are now in the era of the internet.” The solution thus lay in raising political participation, by making use of the web 2.0. Existing creative potential within civil society could be made use of and turned into an “evolutionary spiral”. By engaging individual citizens, local projects and existing best practice projects could cooperate and usher into a productive social dialogue. Projects, such as Politeia 2.0 and Syntagma 2.0 had great promise, Xydia asserted. Their aim is to raise participation in democracy through the internet. Individuals can participate in a process to find a common ground and, Xydia hopes, write a new, collectively composed constitution for Greece. However, she also stressed the importance of European structural funds, which were needed to help strengthen the civil society in Greece.

In the following talk, Younes Ouaqasse, chairman of the RCDS Thuringia, focused on the defining aspects of civil society and described it as an essential part of German society. Its pluralistic aspect represents the political scenery and the openness for participation makes civil society an integral part of democracy. To reduce its tools to elections and protest alone would not do justice to the highly differentiated field and its specialized actors, who work on many different levels: from local grassroots associations to national associations. Even though civil society exists next to the political system, it plays a strong role in shaping political thought and working for change, Ouaqasse said. As an example he presented the peaceful revolution in the GDR that led to the reunification of Germany. Other examples showed how protest and issues that were discussed within civil society could also become part of the political landscape, as has been the case of the Green party.

According to Ouaqasse, challenges for the ongoing crisis in Europe could not be solved on the national level alone, even though national interests were the prevailing motivational force for action. Accordingly, national civic society should move towards a European civil society. A unifying factor for a common European civil society could be a shared system of values, he asserted.

The concluding speaker, Eva Majewski, chairwoman of the European Democrat Students, presented a different aspect of civil society. Quoting Alexis de Tocqueville’s assertion of the “necessity of associations”, Majewski underlined the importance of citizen’s involvement in clubs, associations or church and community organizations. She expressed the position that citizens should try to seek answers to problems themselves rather than have the state decide for them. By showing impressive numbers for citizens’ involvement in Germany – 90% of Germans said that they did work voluntarily for non-profit causes at least once a month, 35% said that they were committed voluntarily more than once a week – the important contribution to society was made obvious. Majewski contributed these high numbers to the social recognition for voluntary services within German society.

Concluding her talk, Majewski stated that in this current crisis, problems needed to be identified and solved on a local level, and not on the European level alone. However, the discourse about the pressing political and economic problems in Greece made the lack of common European ideas obvious. Majewski expressed her hope, that the crisis could function as a starting point to for an open dialogue and help foster a greater consensus.

Engaging a civil society on a European level

During the second day, the participants were split into three groups. In the workshop session, they produced definitions of civil society, assessed the role of civil society in their countries and analyzed how civil society could be engaged on a European level. Working from their respective experiences, they concluded that civil society was an important bridge between society and politics and saw its strength in providing help in areas, where the state failed to act. All groups underlined the importance of the individual commitment in associations and clubs to a functioning civil society.

Comparing the German and Greek example, however, showed a different situation of civil society in both countries, as the economic and social position was challenging for Greek civil society and hindered its efforts. The silver lining, as was expressed by all groups, was the raised awareness within the Greek public that help was needed, and that necessity became a motivational factor for civic actors to become more involved.

Regarding the question of engaging a civil society on a European level, the participants stated that it was desirable to become active on a European level. Opposed to nationally-oriented civil society, a unifying factor could be shared values and a non-monetary form of solidarity between the countries. However, this form of cooperation could not be forced and presented a process rather than a short-term project.

Before lunch, the participants produced a catalogue of tools to the most challenging issues that threaten European youths today: nationalism and youth unemployment.

Youth Exchange as a key tool

In order to overcome nationalism, the participants developed ideas for a bilateral youth exchange program. They viewed interaction between people from different countries as the key to reduce stereotypes and raise awareness for Europe. Furthermore, the exchange could function as an educational tool itself: Students who are undergoing vocational training could take part in exchange programs and benefit from their partners’ experience. Another proposition envisioned “Youth Ambassadors” that would promote exchange and encourage others to join in exchange programs as well. In their view, sharing one’s experience through the internet could function as a multiplying factor. Also, they underlined the necessity of education to overcome stereotypes. As one solution, they proposed that “European History” should be introduced into schools as a new subject, and be taught in addition to national history.

Youth Exchange was also seen as a key tool to combat youth unemployment. Internships in other European countries, exchange of experts and students could lead to better language skills and more practical experience. Furthermore, the groups stressed the idea of self-entrepreneurship and saw alternative forms of work necessary, in order to reduce youth unemployment. Projects for youth by youth (cultural festivals) or community projects (watch houses and repair cafés) could produce value within the communities and prove the creative potential of youths.