KAS, Nairobi held a discussion forum on the 3rd of June, 2019, with young Kenyan Politicians to discuss the post-war German political developments, and the lessons Kenya can draw from the same. The event was graced by Dr. Stephan Werhahn, a grandson to Konrad Adenauer and Association of Catholic Entrepreneurs (BKU) Board Member for International Relations. From the discussion, it was noted that Germany had gone through a difficult political and economic watershed, especially during the Nazi-dictatorship (1933-1945). Some of the major gains that Germany realized were during the tenure of Konrad Adenauer as Chancellor (1949-1963)
17. Juli 2019 Bestellinformationen 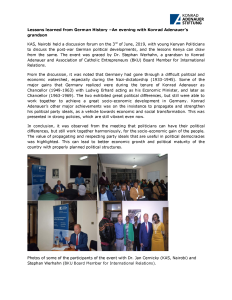