Prospective Political Frameworks for Decarbonisation in 2030

In September 2021, KAS RECAP hosted a series of online closed workshops to explore political issues associated with decarbonisation in Asia‑Pacific. Under the guidance of professional facilitators, participants from public institutions, private sector, NGOs and academia from Asia and Europe have developed a set of futures scenarios for various thematic topics around decarbonisation applying foresight methods. For each topic, four futures scenarios were developed and explored in relation to environmental, social and governance factors along with the identification of key trends and emerging issues.
11. November 2021 Bestellinformationen

In this decarbonisation area, a possible scenario (a) might end up in global governance which sets a general level playing field for standards of critical mineral exploration.

Another scenario (b) assumes a high degree of interstate cooperation on critical mineral exploration.

Under certain circumstances a scenario (c) could lead to an extreme competition on critical minerals with countries considering that competition is more important than decarbonisation.

Scenario (a) comes up with decelerated decarbonisation, as nation states have strong emphasis on national autonomy over grids and do not actively engage in energy cooperation.

In another scenario (b), countries are afraid of “bad neighbors” and thus focus on technological innovation in their respective territories.

Scenario (c) with slow electrification predicts stakeholders adopt a wait‑and‑see approach, although they are willing to utilize regional power grids.

A rather optimistic scenario (d) sees the emergence of a regional grid community in Asia which facilitates interstate power connectivity.

Scenarios (a) & (b) represent an unfavorable environment for growth of green finance as trust in green finance lacks due to increasing green washing.

On the other side, scenario (c) with globally fragmented taxonomy makes competing standards available, which is fac litated by active involvement of various stakeholders in climate finance.

In the scenario (d), a global agreement on sustainable finance is reached to assure green washing is not possible and set key frameworks for harmonized taxonomies worldwide.

Scenario (a) expects the growth of fossil fuels continues, as the Paris Agreement has failed and the technology development is lagging.

In the scenario (b), competition over low‑carbon technology intensifies, while interstate collaboration on non‑fossil fuels may increase.

In the scenario (a), competition over carbon pricing intensifies, when nation states face strong impacts of the EU carbon border adjustment mechanism (CBAM) and Article 6 of the Paris Agreement is unsolved.

However, if the Article 6 is resolved, scenario (b) expects carbon pricing systems worldwide are harmonized.

Under absence of Article 6 and the weak EU CBAM, scenario (c) could lead to growth of voluntary carbon pricing schemes. 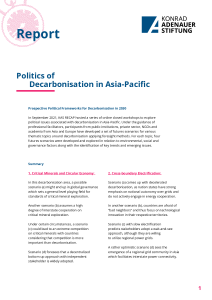