As a member of the German Bundestag as well as a member of the Committee on Foreign Affairs, Dr. Andreas Nick offered his thoughts on the future of crisis management. During his stay in New York, he gave a speech about “Germany’s UN Policy after the Election”. This event took place at the New York office of the Konrad-Adenauer-Stiftung in cooperation with the American Council on Germany (ACG) on November 27th 2017.
December 21, 2017 Ordering Information

Given the unusual experience of extended uncertainty about the formation of a new coalition government in Germany following the federal election in Germany on 24 September 2017, international observers have raised questions and concerns on the potential impact of the next government on Germany's foreign policy and future role in International Organizations.

Whatever the outcome of the extended process of forming a stable coalition government will be, a fundamental and broad consensus on foreign policy among the democratic parties remains and will ensure continuity and reliability on Germany's international role. Even in the absence of a coalition, the recent Bundestag votes on the required prolongation of German participation in international military missions have provided comfortable multi-party majorities in each and every case. 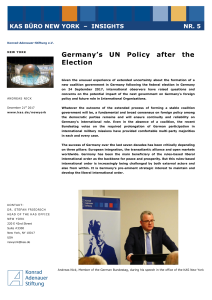 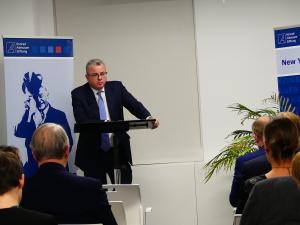