“If there is a lack of internal order, there is a lack of inner strength”, as Konrad Adenauer once said. That also applies to the internal order of institutions; it is instrumental for their effectiveness and clout. Here, you will find out more about the structure and organisation of the Konrad-Adenauer-Stiftung. What is more, this information will help you become acquainted with our diverse activities and find the right contact partners.

The Konrad-Adenauer-Stiftung is a registered association that exclusively pursues non-profit purposes. The statute regulates the responsibilities and composition of the central foundation committees – the Board of Directors, the General Assembly and the Board of Trustees.

As part of a joint process, we developed what we stand for, our goals and our way of working and laid them down in a mission statement.

With around 660 employees, the foundation operates throughout the whole of Germany. It has its headquarters in Sankt Augustin near Bonn and in Berlin. The unique strength of the Konrad-Adenauer-Stiftung’s political work lies in its regional presence. Eighteen political education forums and regional offices convey the messages and themes of the foundation in a way that citizens can identify with.

Furthermore, over 1000 colleagues in more than 100 offices worldwide take care of projects in around 120 countries; in their host countries they advocate for democracy, rule of law, freedom and a social market economy and promote exchange between Germany and the countries of assignment.

Under the auspices of the Board of Directors and the Executive Staff, which includes the Executive Board Office, the Media Centre and the “Strategy and Planning” unit, and with support of the Service Centre, which combines Human Resources, Finance, ICT, Administration and Event Management, the external work of the foundation is divided among five divisions:

The divisions’ activities and formats for the public are as diverse as the range of topics they represent. In addition to the most diverse event formats both in Germany and abroad, political and social analyses and studies, podcast services as well as the support of scholarship holders, we’re particularly proud to be able to award our renowned prizes each year: the Literature Prize, awarded since 1993, distinguishes authors whose work helps do justice to human freedom and dignity; since 1980, the German Local Journalist Prize has honoured newspapers that implement grassroots concepts, tackle difficult issues, defend readers or provide a committed service; since 2002, the Social Market Economy Prize has honoured people who have shown outstanding dedication to the preservation and development of the social market economy; with the internet competition “denkt@g” under the auspices of the Foundation’s Chairman, Norbert Lammert, young people are called on to address the memory of the Shoah and Nazi dictatorship, but also current issues surrounding anti-Semitism, right-wing extremism and xenophobia.” 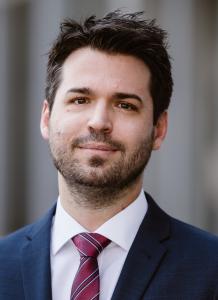 jochen.blind@kas.de +49 30 26996-3227
Organisational chart
Find out more about the internal structure of the Konrad-Adenauer-Stiftung (only in German) 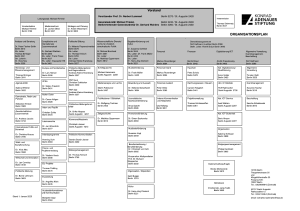