On 1st February 2018, a previously unknown man threw an incendiary device onto the Rangoon property where Myanmar’s de facto prime minister and Nobel Peace Prize winner Aung San Suu Kyi resides. Even though security officials took the incident seriously while at the same time not wanting to overstate it, the increasing threat of terrorism in Southeast Asia has hardly been noticed elsewhere, especially in Europe. There is good reason Myanmar should be the focus of interest in such discussions.
March 15, 2018 Ordering Information 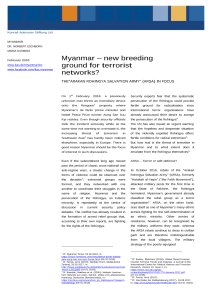