Over the past years Estonia has established a reputation as a pioneer of digital technology beyond the borders of the EU and left its socialist economic system behind. However, with one industry economics and politics have remained loyal to the old system which leaves a lasting imprint on Estonia.
March 27, 2018 Ordering Information

Travelling through the north east of Estonia, where the Baltic state borders Russia, the landscape is characterised by hills and mountains. However, these peaks are in no way natural but were deposited over the last decades. They are the sum of over 100 years of oil-shale mining in Estonia which has produced over a billion tonnes of oil shale. Each ton of oil shale produces 450 kg of slag which must be deposited. Over the years a sparsely green and hilly landscape has evolved through this, which is always spreading.

Along with the US, Russia and China, Estonia is a country which can fall back on rich oil shale deposits. The natural resource is sedimentary rock which, depending on the type, consists of 20 to 30 percent kerogen. This is the preliminary stage to crude oil and can be extracted with water, pressure and chemicals from oil shale and then processed for equivalent crude oil. However, the mining and extraction are costly and conventional crude oil and coal extraction do not fulfil the economic requirements. Scientists estimate the worldwide oil shale deposits to be over ten trillion tons, which would exceed the currently known crude oil reserves by 50%. The exceptional economic gains entice major investment (not only in Estonia) to make the mining of oil shale profitable. The US, which possesses 70% of the international oil shale deposits, is currently only mining a proportionately small amount of oil shale, but is intensively promoting research into alternative methods of crude oil extraction from the rock.

However, critics not only point out the economic costs of oil shale mining. The external effects of production, primarily on the environment, are significant. In comparison to other energy providers the extraction of the crude oil from the shale releases a proportionately greater quantity of greenhouse gases. While 0.4 % must still be expended when using wind power in order to alleviate the damage to the environment arising through this, it already costs 10 % with coal and 18 % with oil shale per dollar generated1. At the same time the emissions are 75% higher than with the extraction of crude oil. Not only are the greenhouse gesses alarming, but also the vast quantities of water required and the slag which is produced during the extraction. Only a small quantity can be used by the building materials industry, the rest ends up in the countryside of Estonia on the hills already described. In addition waste contaminated with poison and chemicals is produced which must be disposed of separately.

The oil shale industry is kept alive artificially by the state

Despite the economic and environmental concerns oil shale extraction has continued in Estonia unhindered for over a 100 years and is still profitable due to low taxes. Based on estimates there is around five billion tons of oil shale in Estonia. On an international scale this is not much, however, Estonia currently accounts for 70% of worldwide oil shale extraction. This branch of industry has a tradition in Estonia and was developed from 1910 while the country was still under Russian occupation, before being systematically built up from 1921 shortly after independence. From 1924 electricity was first generated from oil shale and from 1938 systematic research was conducted at the University of Tallinn to make production more efficient. During the soviet occupation after the Second World War production was expanded and reached its highpoint in 1980, before nuclear power reduced the demand for power from oil shale production. The economy was restructured after gaining independence in the 1990s and production increased again in the 21st century.

Today the industry employs around 6400 workers which is about one percent of the working population in Estonia. In addition it contributes four percent to the gross domestic product of Estonia and delivers twelve terra-watt hours of electricity, 1.2 million barrels of crude oil and 40 million square meters of natural gas per year. When the oil price fell in 2014 the industry threatened to become unviable due to high extraction costs. However, the Estonian state then reduced the tax per ton of oil shale from 1,58 Euros to 0.275 Euros and by doing so kept the industry alive. In 2016 63 million Euros was again invested in oil shale mining with the hope of making it more profitable through further research. The mining is still economical according to the director of the state oil shale company Eesti Energia.

However, this will only remain so if the EU does not increase the price of the emissions certificate, the oil price does not drop again and the Estonian state continues to favour the industry.

Estonia is the worst performing country in Europe for CO² emissions

Even if oil shale mining is an essential part of the Estonian economy it is also responsible for a large proportion of the environmental pollution in Estonia. Due to the high emissions through the industry the Baltic state is last on the list of environmentally friendly countries within the EU. The country has often been cautioned and challenged by the EU and OECD to improve its environmental balance.In an international comparison of the countries with the highest emissions per head Estonia is at place 22, only slightly behind the US and slightly ahead of Russia and 191 other countries. 70 % of the emissions which are produced in Estonia can be traced back to the oil shale industry. Even the special waste in addition to the slag, which still arises during production, such as the chemical residues, corresponds to 82 % of the entire special waste produced in Estonia. In addition the water intensive extraction requires over 90 % of the water in Estonia.

The production of electricity from oil shale covers the power production in Estonia and even enables the export of energy abroad. Estonia is, therefore, not dependent on Russian oil or gas imports in contrast to its neighbours. Next to the major geopolitical advantage there are also economic arguments for maintaining the industry, to keep jobs despite the environmental concerns. In addition oil shale extraction can fall back on structures from the soviet era which a conversion to renewable energies would make more expensive in economic terms. Instead investment is made in research for more efficient oil shale extraction. Together with the 6400 workplaces this is a sufficient reason to carry on production. Recently the director of Eesti Energia announced the export of technologies for the construction of a plant to extract oil shale in Jordan with the prospect of substantial profits from this. With more efficient methods and economic chances the argument about environmental damage recedes further into the background, also in a modern pioneering country. 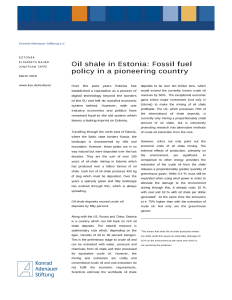 Liaison Office of the Foundation Estonia