by Philippe Burger
South Africa exited apartheid in 1994 with a fragmented and very unequal education system. The new democratic government had to integrate race-based education departments into a non-racial education system aimed at eradicating racial inequality and preparing learners for the world of work. Unfortunately, in the 27 years since the advent of democracy, the government has only been partially successful in achieving this aim. Although the democratic government registered progress in achieving access and even an improvement in the quality of education, most of the inequalities that existed in the mid-1990s still linger. Most township and deep rural schools still underperform former Model C schools (i.e., former white schools), failing to prepare learners for the 21st-century world of work.
February 26, 2021 Ordering Information

This failure means that large numbers of young people end up unemployed, with many never having worked even by their late 20s or early 30s. This has serious implications that stretch further than just the unemployment numbers. Joblessness and the lack of income associated with it contributes to South Africa being the most unequal country globally and results in low intergenerational social and economic mobility. It is generally accepted that for a liberal democracy to be sustainable requires the existence of a strong middle class. If the school system fails to prepare the vast majority of learners for the future world of work, intergenerational social and economic mobility will be limited, thereby entrenching the social and racial divides of the apartheid-era decades after the fall of apartheid, and potentially undermining the stability of the still relatively young democratic order.

In this article I present data that provides (a) an overview of the quality of education in South Africa as measured by the Trends in Mathematics and Science Study of 2019 (TIMSS 2019) released in late 2020, and augment it with data from the Progress in International Reading Literacy Study of 2016 (PIRLS 2016), and (b) an overview of school dropout numbers and the educational attainment of people in their 20s (i.e. those who finished school). I subsequently discuss some of the problems the education system faces, problems that may explain the lack of performance and slow progress made over time. This is followed by a discussion of the broad economic implications of a weak education system, and a conclusion proposing some much-needed measures to improve educational outcomes. 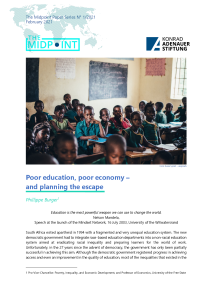