A joint Seminar of KAS and MMA

The India Office of Konrad-Adenauer-Foundation and the Madras Management Association (MMA) have organized a joint seminar on the Goods and Services Tax (GST) in Chennai on 2nd December 2017 to discuss the current challenges and the pros and cons of the GST.
December 3, 2017 Ordering Information 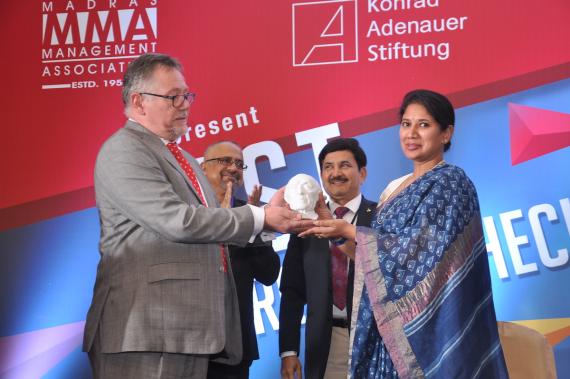 Mr. Peter Rimmele is handing over a bust of Konrad Adenauer to Ms. Kavitha D. Chitturi, President of MMA 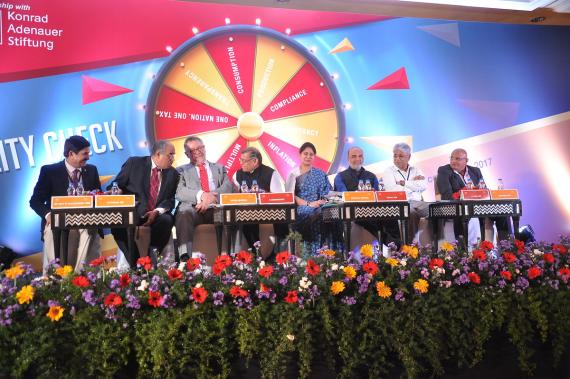 Introduced on July 1, 2017, the GST is the largest economic reform of indirect taxation in India so far. Almost five months have passed since the introduction and the results of the reform are assessed very differently. On the one hand, the GST should create the possibility of a single common market, which would integrating seamlessly the movement of goods and services throughout India and also facilitate exports. On the other hand, there are still several hurdles to overcome in the implementation, since a variety of problems have occurred. After about five months the event was organized to conduct a reality check with all the stakeholders.

Ms. Kavitha D. Chitturi, President of the MMA, welcomed the high-profile speakers and delegates and explained that in 1989, with the support of KAS, the Madras Management Association launched the Entrepreneurship Development Project to support small and medium-sized enterprises. She emphasized that over the past 28 years of implementation, the project has progressed both qualitatively and quantitatively. These joint activities have allowed lots of entrepreneurs to benefit.

Mr. Peter Rimmele, Resident Representative of the KAS in India, emphasized in his introductory speech that, like India, Germany needed a long time, almost 14 years, to politically prepare a reform similar to the GST. In the beginning of the implementation of the law Germany also had to face several problems. Regarding the current implementation problems of GST, he stressed, that it is important to regularly review and adjust it.

Mr. S Gurumurthy, editor of the Thuglak magazine, evaluated the GST in principle as a very good measure. At the same time he criticized the implementation of it. He said that the current economic situation in India is disregarded. However, in his opinion, it does not make any difference whether someone is for or against the GST. Rather, solutions have to be found to implement the GST successfully. First, he mentioned, the problems of India have to be taken in consideration. It is not possible to tackle all the problems in one day with the same model. With around 50 percent of Indian GDP coming from the informal sector, also providing jobs for 128 million people and growing at an annual rate of 18 percent, some of these sectors should be exempted from GST for at least 3 years.