Cambodia and ASEAN in 2020 and Beyond

In late January, the Ministry of Foreign Affairs and In­ternational Cooperation (MFAIC) of the Kingdom of Cambodia conducted the Annual Conference that laid out future directions and priorities for Cambodia´s diplomacy. By and large, Cambodia’s primary foreign policy objective is to pursue national interests in tan­dem with the regional common goal of ensuring peace and security, elevating the level of economic compet­itiveness, bolstering sustainable development and shared prosperity, and ensuring regional integration.

As far as ASEAN is concerned, MFAIC has formulated Cambodia’s priorities in the regional grouping in 2020 through inclusive consultation with various line minis­tries and agencies as well as a number of think tanks in Cambodia to integrate the sectoral agendas into ASEAN integration, reflecting the priorities set out by Viet Nam, who is assuming the current ASEAN Chair­manship under the theme “Cohesive and Responsive.”

ASEAN has always been an integral part of the Cam­bodia’s foreign policy. Despite being a latecomer, Cambodia has proven to be an active and construc­tive supporter of the ASEAN Community-building. The country’s boldness in assuming its first ASEAN Chair­manship in 2002 after merely three years of participa­tion in this regional grouping demonstrated a strong political will and unwavering commitment of Cam­bodia’s top leadership towards regional integration and multilateralism. Such commitment remains un­changed but ever more resolute.

At the Closing Ceremony of the MFAIC Annual Confer­ence, Samdech Techo Hun Sen, Prime Minister of the Kingdom of Cambodia, clearly stated that: “Cambodia will further contribute to the ASEAN Community-build­ing process in order to serve the people… to safeguard and uphold ASEAN’s unity and centrality, and to pro­mote and strengthen relations with external partners in pursuit of social and economic developments via ASEAN based on two fundamental principles, namely decision-making through consensus and non-interfer­ence into each internal affairs.”

While having various sectoral priorities, our foreign policy towards ASEAN can be summed up in three main approaches.

The First Approach is “Peace First”

For small states like Cambodia, peace is above all else, be that in domestic, regional or global discourse. To this end, Cambodia’s foreign policy has been very con­sistent as it has overarching guidelines stipulated in the Constitution that requires the country to uphold the policies of permanent neutrality, non-alignment, non-interference, peaceful co-existence with neigh­boring countries and all friendly nations in the world, peaceful settlement of disputes and mutual respect for the interest of one another.

Those principles are the by-products of Cambodia’s history and geopolitical pressures. After obtaining independence in 1953, the regional security equilib­rium was not very favorable to peace in the Mekong sub-region which had been demolished by proxy wars and civil strife. Such experiences compelled Cambodia not only to put peace above anything else, but also to adhere to neutrality and non-alignment to navigate through the turbulences of the Cold War and more im­mediately, the Vietnam War.

Currently, Cambodia sees the world as moving to­wards a complex multipolar system that is primarily characterized by the great power rivalry, which has directly affected the functioning of the regional and international orders. The heated tension has acceler­ated pressure for ASEAN Member States (AMS) to be selective in partnering with some external powers, more often than not, at the expense of others. This has been further exacerbated by geopolitical contes­tation among the regional powers, coupled with the longstanding complex territorial issues.

Nevertheless, Cambodia remains steadfast to the above-mentioned fundamental principles and has al­ways endeavored to mitigate issues that divide, and at the same time, magnify issues that unite ASEAN. The Royal Government of Cambodia has firmly adhered to ASEAN’s centrality and unity for peace and coopera­tion and distanced itself from any call for unity for the purpose of confrontation that goes against the ASEAN Way and may hamper regional peace and stability.

The ASEAN centrality has been centered on both trust and confidence that ASEAN partners have in this re­gional grouping and ASEAN’s internal unity and exter­nal neutrality in relations to great power competition and the evolving geopolitical landscape of the Asia-Pa­cific. With growing number of mechanisms and initia­tives, some of which are highly abstract, it is imperative that ASEAN centrality shall be more assertive in syner­gizing complementarities among every possible part­nership and cooperation frameworks.

For this year, major events with external partners in­clude the ASEAN-New Zealand Leaders’ Summit and the ASEAN-US Special Summit. As the country-coor­dinator for ASEAN-New Zealand Dialogue Relations (2018-2021), Cambodia is proud that we could receive agreement from AMS to convene the ASEAN-New Zea­land Leaders’ Summit after the conclusion of the 36th ASEAN Summit in April in Da Nang, Vietnam. More noticeably, Samdech Prime Minister Hun Sen was the first leader to express support for the US to convene the ASEAN-US Special Summit in the US to be held on 14 March in Las Vegas.

ASEAN is an indispensable platform for Cambodia to standardize itself in almost every aspect of the so­cio-economic developments. More importantly, it also drives Cambodia to do more in order to catch up with other AMS through regional commitment and individ­ual enterprise to narrowing down the development gap between old ASEAN and the new ASEAN members and to ensure regional integration that is inclusive, people-centered and outward-looking.

Economically, ASEAN is already the fifth-largest econ­omy in the world with a combined gross domestic product (GDP) of $3 trillion USD. Being also a very at­tractive market, thanks to the large regional consump­tion power of almost 650 million people, ASEAN has become one of the top investment destinations in the world.

In terms of institutional mechanisms, among with many other free trade agreements, ASEAN has man­aged to pull off one of the biggest economic agree­ment with the completion of negotiation on the Re­gional Comprehensive Economic Partnership (RCEP), the world’s largest free-trade area. Cambodia is ready for the signing of RCEP in 2020 in Viet Nam to express ASEAN’s steadfast commitment to upholding a multi­lateral rule-based trading system.

Cambodia will also foster larger intra-regional trade, enhanced connectivity, and preparation for the digital economy. Cambodia is committed to improving the in­frastructure through enhanced transport connectivity and internal integration, the expansion of energy cov­erage, as well as digital connectivity. We see the need for ASEAN to mobilize the innovative funding resourc­es in order to concretize the Master Plan on ASEAN

Connectivity (MPAC) 2025, and to seek complementar­ities among various initiatives and cooperation frame­works that deal with regional connectivity. In the same vein, there is a need to build a vibrant regional logistics system linking key economic poles and contribute to the enhancement of the regional competitiveness and the diversification of economic growth.

To promote digital connectivity and to build a digital economy, Cambodia is working on the development of Digital Education Policy Competency Framework, which will provide strategies and guidelines for main­streaming the digital education in Cambodia schools at all levels. Cambodia will endeavor to raise this agenda on the ASEAN platform.

From a recipient country of the UN peacekeeping force in 1992-93, Cambodia has become an active contribu­tor to UNPKO in many parts of the world. Since 2006, Cambodia has dispatched 6,556 personnel, including 338 women, to join UN peacekeeping missions in nine countries, namely in Sudan, South Sudan, Lebanon, Cyprus, Syria, Chad, Mali, Central African Republic and Yemen. In terms of woman’s empowerment, Cam­bodia ranks tenth among 120 countries globally that send female soldiers to the UN missions. Thanks to their dedication and commitment, the UN has praised the Kingdom for the heroism and professionalism of its female peacekeepers.

Cambodia is committed to creating meaningful partic­ipation of women in the security dialogue and peace processes, and create a wider space for them to play a bigger role in conflict prevention initiatives as well as in humanitarian assistance and disaster relief op­erations. Indeed, woman’s participation in mediation is essential for achieving lasting, positive peace, which goes well beyond the end of the conflicts.

Cambodia also clearly understands the risks and chal­lenges posed by landmines and explosive remnants of war (ERW) on socio-economic development and daily life of the people. The RGC believes that full and effec­tive operationalization of ASEAN Regional Mine Action Centre (ARMAC) will help promote the awareness of dangers posed by land mines and ERW and will con­tribute to the reduction of human and material casual­ties in suffering countries including Cambodia.

Erupting from ashes of war to a fast-growing economy with enhanced integration to the region and the world, Cambodia, through ASEAN, does have important expe­riences to share from a post-conflict nation perspec­tives. Cambodia can be among the active contributors in terms of preventive diplomacy and conflict preven­tion, and the socio-economic development owing to its successes in achieving the Millennium Development Goals (MDGs), among others. 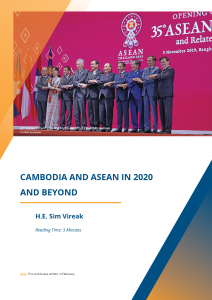 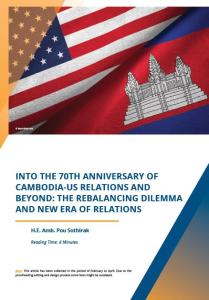