While significant milestones have recently been reached in the Libyan political dialogue held under the United Nations’ auspices since November 2020, including the establishment of a new government of national unity, the holding of general elections set for December 2021 has now become the main focus of attention and a top priority of both the Libyan stakeholders and their international partners. However, persistent disagreement on the constitutional basis needed to hold these elections, and in particular on whether to rely on the draft constitution issued by Libya’s constituent assembly in 2017 or on an alternative document, may undermine the progress achieved so far and hamper the completion of the agreed roadmap. This paper will attempt to review the main obstacles that have prevented the adoption of a permanent constitution in Libya to date, and assess whether the various constitutional options currently under discussion could provide a relevant basis for Libya’s next elections.
31. Mai 2021 Bestellinformationen 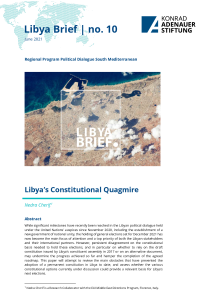