Germany’s first Democratic Constitution, its Collapse, and the Lessons for Today

On 14 August 1919, Germany’s first democratic constitution came into force. The Constitution of the German Reich, soon known as Weimar Constitution marked the end of the German Empire and introduced a legal framework that was ambitious for its time - maybe too ambitious: Only 14 years later, the Weimar Republic collapsed into Nazi Germany, an authoritarian state with its dictator as untouchable center of the law. The question of whether or not Hitler’s rise to power had been predetermined by the flaws and weaknesses inherent to the Weimar Constitution was heavily discussed throughout the second half of the 20th century. The legacy of the 1919 constitution, however, reaches far beyond its failure: Germany’s post-World War II constitution, the Basic Law of 1949 was largely drafted in reflection of the Weimar Republic but also incorporated certain of its constitutional provisions, acknowledging their progressive design. Today, the Weimar experience provides the potential of critical reflection for constitution-building in young democracies as well as for established democratic states, whose foundations are more and more subject to illiberal and populist attacks.
27. Mai 2020 Bestellinformationen 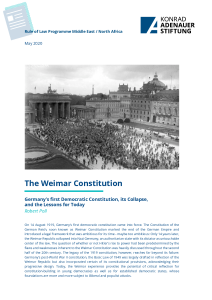