Norway to form a new government

After the Norwegians went to the polls in October 2017 the governing conservative party Høyre headed by Prime Minister Erna Solberg, gathered support to form a new coalition with the right-leaning popu-list Progress Party (Fremskrittpartiet) and the liberal Venstre party.
22. Januar 2018 Bestellinformationen

Preliminary talks in December had paved the way for coalition talks starting on January 2nd. After twelve days of “fruitful discussions” according to the incumbent Prime Minister, the parties managed to merge the positions and agree to form a minority government. Already during the previous legislative period the Christian democrats were reluctant to join a coalition with the right-leaning Fremskrittspartiet. However, despite being dependent on the support of the Christian Democrats, a minority government has proven to be a stable solution throughout Norway’s history.

The election result had indicated a win for the conservative camp, and weakened the social democrats. Although the Arbeiderpartiet finished first, they suffered heavy losses in their left wing, rendering them unable to form a government under their leadership. Consequently, for the first time in 30 years, a conservative Prime Minister was able to defend her position in office following an election.

All parties present political gains to their electorate

During the coalition talks both the Progressive and Liberal parties were able to place key points of their political agenda in the agreement to fulfill the party’s commitments to their electorate. Siv Jensen, the Progressive’s leader confirmed that she would work to extend Norway’s staunch stance on immigration policy by further impeding family reunifications, the acquisition of the Norwegian citizenship, and introducing a Burqa-Ban. In contrast, Trine Skei Grande of the liberal party pushed for oil drilling bans, citing unforeseeable environmental concerns. Furthermore, the party raised the possibility of introducing an emission trading scheme. Erna Solberg was satisfied with the result pledging to make Norway the world’s most livable country. The Prime Minister to-be set out to reduce unemployment and poverty and foster immigrant’s integration into the Norwegian society. After a precipitous drop in oil prices, Norway’s finances in recent years have complicated. Yet a surge in its price has revived economic growth according to recent forecasts.

Three key positions in the administrations to be held by women

Once the coalition talks were concluded, the new government’s competences were divided among the parties. While the conservative party continues to name the Prime Minister it will also control the Ministry for Defence and Foreign Affairs among six other ministries. The Progress Party will fill seven government posts including the Ministry for Finance, Justice, and Immigration and Home Affairs. Lastly, the Liberals will control three ministries comprising the climate and environmental department. Overall, the government adheres to the rule of balancing female and male ministers, by employing nine women and ten men in the cabinet considering three women being placed at key positions namely as the Prime Minister, the Ministry of Foreign Affairs and the Ministry of Finance. Four days after concluding the talks King Harald V. officially appointed the government, allowing them to start their work four months after the election. The reshuffle of some cabinet ministers indicates the government’s focus on international security and the importance of European and Trans-Atlantic Relations. Although previous experiences confirm the stability of minority governments in Norway, it remains to be seen in how far the coalition’s new partner will impact the new government. 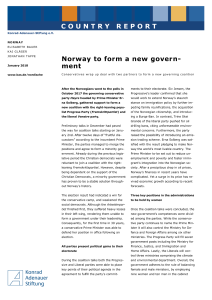