An Appraisal of Common Values and Common Interests

From March 28 until April 1, 2012, the Working Group of Young Foreign Policy Experts of the Konrad Adenauer Foundation conducted a conference in Baku, discussing the full range of issues characterizing the Azerbaijani-German relationship with a broad selection of Azerbaijani scholars, politicians, and activists. The Working Group is grateful for the hospitality of our Azerbaijani partners and the high quality of the exchange.
5. April 2012 Bestellinformationen 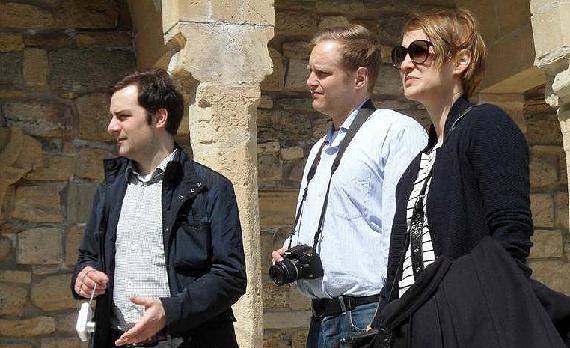 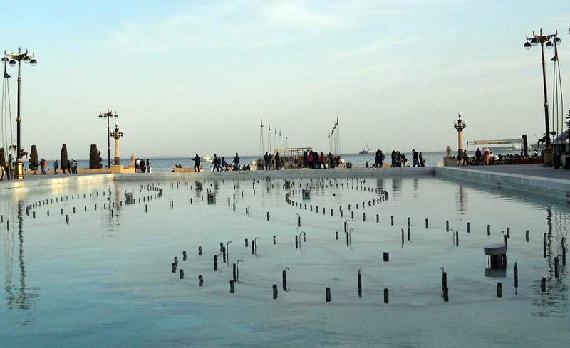 View on the Baku promenade 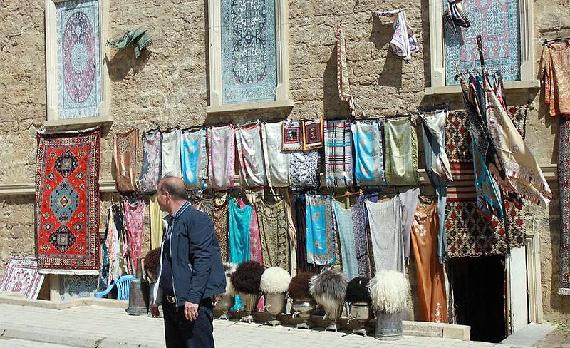 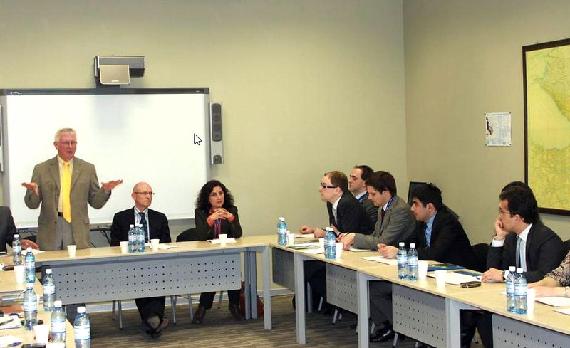 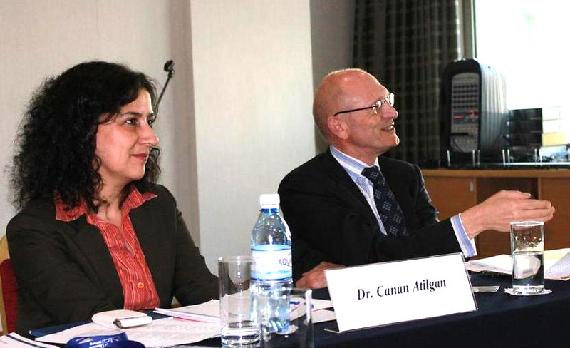 In the opening session “Azerbaijan’s Role in the Region: Balancing Security Threats and Driving the Regional Development” Azerbaijani participants pointed out that the so-called South Caucasus region was mainly a Western construct since there was no real social cohesion between the countries of Georgia, Armenia and Azerbaijan. Therefore, the discussion about whether Azerbaijan was a leader in the region seemed misdirected to some. Central to the Azerbaijani side was the Nagorno-Karabakh conflict with Armenia, since almost 20 per cent of Azerbaijan territory is presently occupied and a potential outbreak of hostilities would lead to military conflict and war. Here, Azerbaijani participants regarded Russia to be a more helpful partner in managing or resolving the conflict than the European Union. Azerbaijani participants made clear that they desire more engagement from Europe which should mainly include a soft-power approach to accelerate the peace process.

Regarding foreign policy, Azerbaijan is conducting a multi-vector policy to maintain stability in the region and also a balance of relations with Iran and Russia. It was said that this policy was adopted by choice and not by default. Azerbaijan thus behaved more passively than could be expected from the richest and most powerful country in the neighborhood. It was stressed that Azerbaijan was not open to “adventures”. However, neither Azerbaijan’s policy orientation nor its basic values could be clearly defined, which brought to mind the idea of a selective Azerbaijani identity that builds upon both Western and Eastern elements, but also that of a bridge between East and West, with the accompanying potential of modernization and change. For Azerbaijan, good terms with its neighbors are important (with the exception of Armenia), namely with Russia (bandwagoning), Iran (impartiality, not neutrality) and Georgia (financial support). That said, the Azerbaijani participants stated that Turkey was the most reliable and therefore the crucial partner for Azerbaijan. The partnership with Turkey had the potential for deeper integration and co-operation. Azerbaijan feels more connected socially to Turkey than to Armenia or Georgia.

The second session “Energy: Opportunity or Challenge for Regional Cooperation?” illustrated two major perspectives on regional energy cooperation. The role of energy issues for enhanced cooperation between the countries of the South Caucasus was discussed. Firstly, it was assumed that energy traditionally was rather a blocking element for regional cooperation when used as a power tool. Secondly, with only a few countries holding major resources of fossil fuels, cooperation could be problematic or one-sided for other countries without these resources. Nevertheless, the coming depletion of resources offered new perspectives for cooperation within the region. Especially in the field of renewable energy it would be difficult for these countries just to rely on their own capacities. Cooperation among the neighbors could open important opportunities to develop long-term solutions, especially with regard to renewable energies and sustainable energy use.

With regard to energy cooperation within the broader region – including Turkey and Europe – Azerbaijani participants explained the current developments on the Southern Corridor and, consequently, the country’s role in enhancing energy security in Europe. Different competing pipeline projects to diversify Europe’s imports were outlined. In this regard the new project of a Trans-Anatolia Gas Pipeline (TANAP) – running from Azerbaijan to the Turkish-Bulgarian border, and mainly financed by Azerbaijan – could be a “game changer”. Nabucco, in a shorter version called “Nabucco West”, would probably be more financially viable. However, it was pointed out that there were still two “Italian options”, with the Italian Greece Interconnector (IGI) and the Trans Adria Pipeline (TAP) competing for natural gas from the Shah Deniz 2 field. According to the Azerbaijani participants, Azerbaijan planned to announce the winner in June 2012, based on the assessment of their paybacks and their strategic importance. (TAP was chosen in June 2013).

The initiative “Democracy Starts with You” was introduced by the German participants. The goal of this project, supported by the Konrad Adenauer Foundation, was to encourage young people in the South Caucasus Region to engage in political participation and to become part of the political dialogue in their respective countries. In the discussion it was noted that projects like “Democracy Starts with You” were met with some skepticism in Azerbaijan. One reason for this was a general fear of global conspiracies behind foreign political initiatives. In view of the current developments in Russia it was stated by the Azerbaijani participants that only a successful “Russian spring” could incite political change in Azerbaijan. The Arab spring did not have an influence on Azerbaijan because of the regional and cultural dissimilarities with the Maghreb region. The impact of regional developments on the national scenes was illustrated with the example of Georgia. There, measures taken against corruption with help from the United States were working reasonably well and were recognized by Azerbaijani travelers and traders when visiting the country. Georgia thus stood as an example for the possibility of change, since what was possible in Georgia might also be possible in Azerbaijan. According to the participants, this example could be a small but first step in the direction of change and political diversity in Azerbaijan.

The fourth session “Political and Economic Transformation: Outcomes Achieved and Still Achievable” made clear that since independence, Azerbaijan passed through a long political and economic transformation process which was still ongoing. The country experienced spectacular GDP growth and democratic institutions were formally established. The political system itself, however, was inherited from its predecessor, the Soviet republic, with strong continuities between “old” and “new” elites which negotiated state policy behind the closed doors of the executive. This was considered by the participants as being one reason for the lack of substantial political work and political discussion in the Azerbaijani parliament. Although plenty of political parties existed, they continued to be marginalized and without a sustainable political platform.

Azerbaijan’s GDP had more than doubled during the past five years. But this growth also led to an overreliance on oil revenues and to a high risk of “Dutch disease”: investment in the booming oil sector crowds out investment in the agricultural, industrial and service sectors. Also, a large income gap between the capital Baku and the other regions of the country persisted. Other problems were the high level of corruption, the lack of transparency and the size of the shadow economy, estimated to be up to 60 per cent of GDP. Yet, the oil revenues had led to a large increase in state revenues that were at least in part used to significantly decrease the poverty rate. There was consensus among the participants that Azerbaijan was still in the middle of a political and economic transformation. The country had already experienced a lot of important changes, but there was still a long way to go to fully transform the country into a democracy with a free and social market economy.

In the final session “Azerbaijan’s Relations with EU and NATO” Azerbaijani participants pointed out that today Azerbaijan was not interested in joining any of the two organizations. With the change of presidency in Azerbaijan from Heydar to Ilham Aliyev relations with NATO and the EU have deteriorated.

Regarding the European Union, the Azerbaijani side made clear that their country had never been given a real perspective to join the EU. The EU needed Azerbaijan more than vice versa. The EU was mostly considered by Azerbaijan to be an inefficient organization in its conflict management of the Nagorno-Karabakh issue as well as in the resolution of its own financial crisis. It turned out, that in the last years Azerbaijan had become more sensitive to criticism from Brussels. Azerbaijan still seemed not to have decided whether it politically belongs more to Europe or to Asia.

Considering NATO’s Role, Azerbaijani participants stated that NATO was only seen as one actor amongst many in the region, such as the Collective Security Treaty Organization (CSTO) and the Shanghai Cooperation Organization (SCO). Despite Azerbaijan’s institutionalized relations with NATO within the Individual Partnership Action Plan (IPAP), there was no clear direction where cooperation might lead. The best example was Azerbaijan’s ambiguous posture towards its contribution to NATO’s International Security Assistance Force (ISAF) mission which was described by the Azerbaijani side as a symbolic act without an underlying strategy. Azerbaijan’s contribution to ISAF was a non-issue in the domestic political discourse of the country. The future relations between Azerbaijan and NATO would be mainly conditioned by the further development of NATO-Russia relations. It was pointed out that Azerbaijan did not perceive NATO as a threat for its own security. Areas for closer cooperation between NATO and Azerbaijan could be the reform of Azerbaijan’s security sector and the democratization of Azerbaijan’s armed forces.

With respect to the European Union, there were several reasons for optimism regarding its relations with Azerbaijan. The EU is Azerbaijan’s most important trading partner. Although Azerbaijan does not want to become an EU member, at least some degree of convergence with European values was intended. Bigger efforts by the EU in the management and resolution of the Nagorno-Karabakh conflict and stronger EU measures for supporting Azerbaijan’s younger generation were discussed as possible fields for closer cooperation. Political pressure from the EU on Azerbaijan should be measured but was considered helpful by the political forces in Azerbaijan which aim to transform the country into a full democracy. The lack of a clear direction in Azerbaijan’s foreign policy might even provide an opportunity for bringing the country closer to the West.