Mr Peter Rimmele, Resident Representative to India of KAS delivered the opening remarks. He regretted that in our rush to adopt new technologies that make our lives easier, we have often forgotten and neglected their long-term ramifications. “World Environment Day has been celebrated since 1974. Yet, not enough has been done to substantially reduce global warming,” he pointed out and strongly advocated that governments, intergovernmental organizations, NGOs, businesses and members of civil society must act now towards a more sustainable world for the benefit of future generations.
His way forward has Three Prescriptions:

Sugato Dutt spoke on the importance of green economy and in particular about the scenario in Tamil Nadu state. He pointed out that though Tamil Nadu has a per capita GDP of 3900$ which is the second highest among major states and has a 60% urbanised society, there are major challenges such as low per capita land and water availability, decline in manufacturing, and commercial exploitation of natural resources. He touched upon the Aichi Biodiversity Targets. He stated that Tamil Nadu has a goal of 33% forest cover and at the current recorded level of forests at 23%, there is a gap of 10%. This, he said, translates to a requirement of planting 320 million seedlings in the next ten years and requested all stakeholders including NGOs and Private enterprises to work jointly to realise this ambitious goal.

Prof. Nitya Nanda highlighted the fact that India is among the most climate vulnerable countries of the world. Social inequality has increased in the last ten years and pre-dominantly in recent years, he said. He was critical in pointing out that though Niti Aayog has come out with a good report on Social Inequality, they have left out economic inequality.

He lamented that India is lagging behind many countries in education and health sectors and remarked that the pandemic has seriously exposed the fault lines in our health sector. “India has 5 hospital beds per 10,000 persons and we are behind countries like Pakistan, Bangladesh and Vietnam,” he said. He attributed the increase in frequency of cyclones affecting India to increase in sea temperature. He cautioned that India must show commitment towards attaining social progress.

Dr T D Babu spoke on the theme of “Habitat Management: Assessment and Course Correction in the way forward to 2030.” Quoting a couplet from the Tamil poetry work ‘Thirukurral’ he said that even two thousand years ago, our ancestors had spoken on the need for bio-diversity. Habitat does not mean only macro objects but it includes even small bacteria, he said. He talked about the initiatives taken in Chennai City on Habitat management and pointed out several lacunae like:

He also acknowledged the positive initiatives and suggested that there has to be periodic habitat audits. “The management of habitats must be done at micro level with the involvement of all, but importantly, of local stakeholders,” he said.

Summing up the discussions, Dr N Krishna Kumar said that ecology and environment have to be balanced. He suggested that technologies and resources must be made use of to achieve sustainable goals. He advocated that sustainability and achieving SDG 2030 goals must become a people’s movement. In the interactive Q&A Session, the panellists answered many questions posed by the audience. Mr Peter Rimmele suggested that MMA can play a key role in the gigantic project envisaged in the Tamil Nadu government’s plan of planting 320 million seedlings in the next ten years.

Mr Dipankar Ghose of Prakruthi gave the concluding remarks. Gp Captain R Vijayakumar (Retd) VSM proposed the vote of thanks and the event concluded at 8 pm. 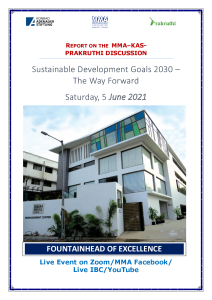