Accelerated "Energy transition" in Germany after Fukushima: An Overview of the German "Energiewende" - www.kas.de

Accelerated "Energy transition" in Germany after Fukushima: An Overview of the German "Energiewende"

by Dr. Christian Hübner
The concept for the German energy transition (“Energiewende”) was approved at the end of 2010. Not long afterwards, the Fukushima disaster in Japan sped up the withdrawal from nuclear power and accelerated the timetable for the intended transition. Nevertheless, the transition’s designated targets will be implemented as originally envisioned to satisfy the criteria of cost-effectiveness, energy security, and climate protection. Two years on, the German public views progress with considerable scepticism. But an in-depth analysis indicates that the energy transition can be economically viable.
June 4, 2012 Ordering Information 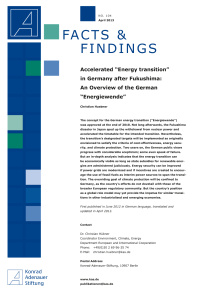