by Malak Mansour
On September 21, the Palestinian Center for Policy and Survey Research (PSR) presented the findings of the 81 joint Public Opinion Poll carried out in cooperation with the Konrad-Adenauer-Stiftung Palestine during a virtual press conference.
September 21, 2021 Ordering Information

Dr. Khalil Shikaki, director of the Palestinian Center for Policy and Survey Research (PSR) together with Steven Höfner, Konrad-Adenauer-Stiftung Palestine Director, presented the most important results of the 81st public opinion poll conducted in the West Bank and the Gaza Strip between 15-18 September 2021.

The period before the conduct of the poll witnessed several developments including the killing of a political activist, Nizar Banat, right after his arrest and sever beating by the Palestinian security services, the eruption of widespread demonstrations against the PA demanding justice for Banat, and the escape of six Palestinian prisoners from the Gilboa prison in Israel and the capture of four of them (just before the fieldwork began).

It also tackled the continued Egyptian-mediated Hamas-Israeli negotiations to strengthen the ceasefire reached in May and begin the process of reconstruction, the meeting of PA president Mahmoud Abbas with the Israeli defense minister Benny Gantz in Ramallah to talk about Palestinian-Israeli relations and means of improving them while strengthening the PA by implementing various trust-building measures.

This press release addressed these issues and covered other matters such as the general conditions in the Palestinian territories, the peace process and future possible directions for Palestinians in the absence of a viable peace process.

The total size of the sample is 1270 adults interviewed face to face in 127 randomly selected locations. Margin of error is +/-3%. For further details, contact PSR director, Dr. Khalil Shikaki, or Walid Ladadweh at tel. 02-296 4933 or email pcpsr@pcpsr.org. 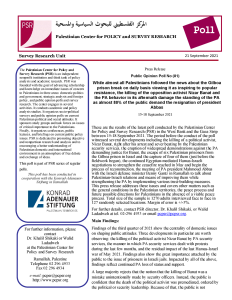