On March 22, the Palestinian Center for Policy and Survey Research (PSR) presented the findings of the 83 joint Public Opinion Poll carried out in cooperation with the Konrad-Adenauer-Stiftung Palestine during in an online event at our office in Ramallah.
March 22, 2022 Ordering Information

Dr. Khalil Shikaki, director of the Palestinian Center for Policy and Survey Research (PSR) together with Steven Höfner, Konrad-Adenauer-Stiftung Palestine Director, presented the most important results of the 83rd public opinion poll conducted in the West Bank and the Gaza Strip 16 and 20 March 2022.

The period before the conduct of the poll witnessed several domestic developments including the launching of a second round of the local election campaigns in the West Bank and the holding of a special session for the PLO Central Council, in which important decisions relevant to Palestinian-Israeli relations and the filling of several senior positions in the organization’s leadership.

It also witnessed increased settlers’ attacks in areas labeled B and C of the West Bank and increased tension in the Shaikh Jarrah neighborhood in East Jerusalem. Amnesty International issued a report in which it characterized Israel as an "apartheid state". Finally, after weeks of anticipation, war erupted between Russia and Ukraine.

This press release addresses these issues and covers other matters such as the general conditions in the Palestinian territories, the peace process and future possible directions for Palestinians in the absence of a viable peace process. Total size of the sample is 1200 adults interviewed face to face in 120 randomly selected locations. Margin of error is +/-3%. 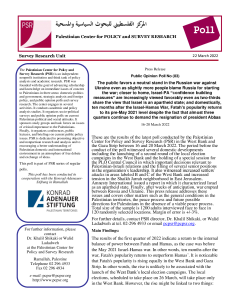