To date, enforcing the European asylum system has been met with only limited success. Despite acknowledged difficulties, increasing pressure will in future be needed to comply with legal directives and laws. A further task of the European Union consists in securing its borders and combating the root causes of migration beyond Europe. The future task of German and European policy on asylum and migration lies in striking a balance between democratic participation in debates on refugees and migration on the one hand and responsible and ethical conduct towards vulnerable people on the other.
October 27, 2015 Ordering Information 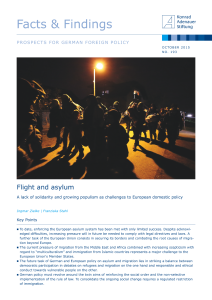