France has a problem with Islamism - www.kas.de

The killing of a French teacher sparked a new discussion on Islamism and Islamist terrorism. One thing is clear: France has a deeper problem with Islamism. What is causing the problem? Which aspects can also be important for Germany? What preventive measures can we take?
January 20, 2021 Ordering Information

The current discussion about France's "problem with Islamism" fails to concider the advancing polarization in the larger societal context - as well as its facilitating effects on the radicalization of individuals and groups.

This polarized context not only complicates an appeased reflection and critical discussion on how to tackle France’s problem with Islamism, but further feeds potential escalation dynamics.

The polarization of the French society is the result of the sustained interactions between two diametrically opposed and exclusionary identity conceptions and narratives (an ethno-nationalist identity opposed to an Islamic identity), which emerged from France’s problem to properly address the issues that emerged as long-term consequences of the demographic changes accompanying the 1960s–1970s immigration waves.

These interactions not only produce the dominant narrative framework, in which current debates about national identity, integration and the place of religion in a secular society are still articulate, but also enable the radicalization of the larger societal context. The later benefitting the emergence of new agitprop-type movements. 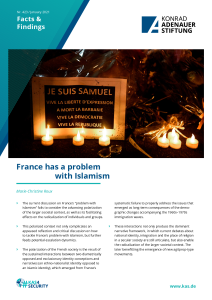