More than 4500 people registered for PDAF2021, and more than 1600 attended via the Hopin platform, which hosted the forum. Participants attended from 70 countries around the world, while 150,000 more tuned in via social media platforms.
April 1, 2021 Ordering Information 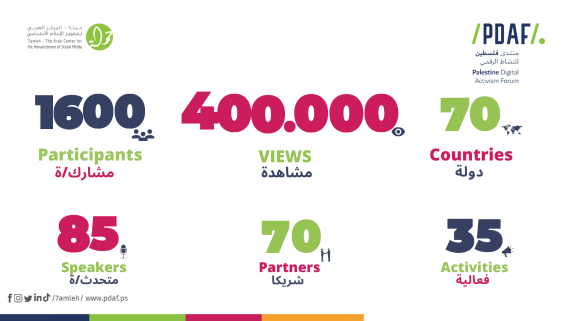 The forum hosted 85 speakers and trainers from all over the world, and organized 35 different virtual events. This year’s forum was able to transcend all barriers and borders, and brought together Palestinians who live in Palestine, the diaspora and refugee camps across the world.

The four-day virtual event aimed at highlighting the changes and transformations that occurred in the digital realm due to the ongoing coronavirus pandemic, and examined its impact on Palestinian digital rights, both in the regional and international contexts. The forum brought together experts from all over the world, in order to create a space to exchange ideas and experiences,in spite of the pandemic, through a number of political sessions, virtual discussions and training workshops that were able to foster unique and exciting conversations on a variety of topics.

Numerous speakers from local, regional, international and global organizations participated in the conference, including representatives from UNESCO, UN Women, United Nations Population Fund (UNFPA), and Amnesty International, in addition to representatives from the world’s largest social media companies, such as Twitter, Facebook and Instagram. 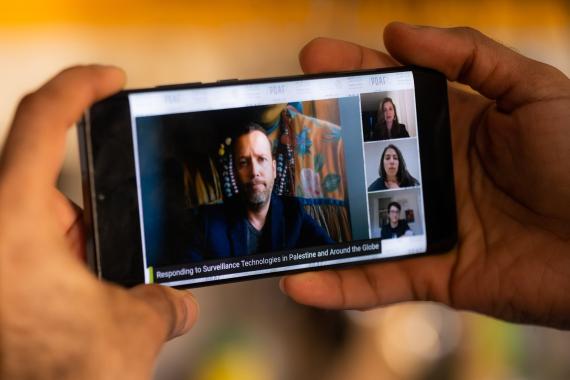 Political sessions on the challenges of Digital Activism in Palestine, the Arab World and Worldwide

In the first and second days of the forum, 7 political sessions were held on a variety of topics. These included privacy and medical histories, fake news and its impact on people’s awareness, in which George Salama, the Head of Public Policy, Government & Philanthropy in the Middle East, Pakistan and Afghanistan at Twitter, spoke about the role of social media in combating fake news, with Twitter as an example. Salama noted that Twitter is continuously and seriously working to develop better tools and add-ons that can guarantee the rights of all users to access accurate information, that they can test and fact-check.

The third session of the first day, titled “From the Screen to the Street,” addressed the future of digital activism in Palestine and the Arab world, and included speakers from Palestine, Jordan, Iraq and Tunisia.

As for the second day, 4 political sessions were held, the first of which addressed the Palestinian narrative in the digital era, through presenting a number of inspiring initiatives that work on promoting and enhancing the Palestinian narrative. The second session addressed “Surveillance Technologies in Palestine and Worldwide,” and the third session titled “Data Protection in the Arab Region,” addressed the insufficiency of legislations in the region, and how they enable authorities to abuse users’ personal data.

The second day ended with an exclusive Q&A with representatives from Facebook, including Miranda Sissons, the inaugural Director of Human Rights Product Policy at Facebook, and Dina Hussein, the Counterterrorism & Dangerous Organizations Policy Head for EMEA at Facebook, who engaged with questions the participants posed regarding the moderation of Palestinian content at Facebook. In a question posed to Facebook about the use of artificial intelligence to flag and remove "harmful and inappropriate content," and how that can entail certain levels of bias and discrimination, as well as undermine the Palestinians' right to freedom of expression,  Sissons noted that the company may indeed make mistakes, but continues to work to improve their policy to limit such incidents. 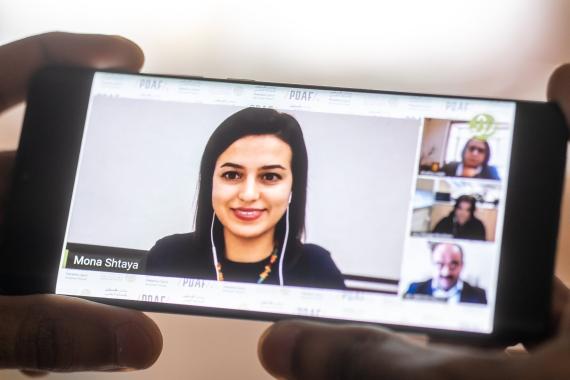 Three digital talks were conducted and received wide participation, including a talk on social media and the Palestinian elections, which elaborated the possible impacts social media can have on the election, which will be held for the first time in an era characterized by the prevalence of social media. The talk also discussed topics such as hate speech, fake news, and cybercrime laws that can be used to shrink spaces for freedom of expression.

The forum also hosted a very special talk on artificial intelligence, delivered by Palestinian engineer and expert Akram Dweikat, in which he explained how this technology can be weaponized for racist and discriminatory purposes, just as much as it can be utilized to advance social change. The third talk, titled “Digitizing Palestinian Memory and History,” addressed the importance of archiving Palestinian histories, memories and mappings, in an effort to guarantee the protection of the original Palestinian narrative, and its transmission to upcoming generations. 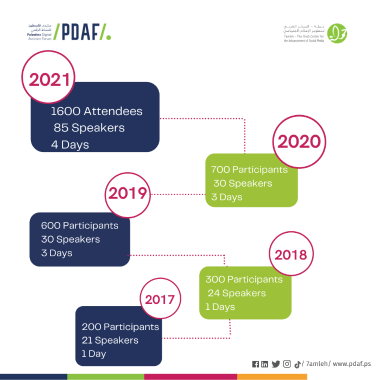 This year’s forum organized 17 interactive capacity-building workshops, on a variety of different topics, which targeted activists, human rights defenders, journalists, trainers, civil society workers, children, and parents. The workshops were delivered by a number of local, regional and international trainers, including representatives from some of the largest social media companies such as Facebook, Twitter and Instagram.

The forum concluded with a roundtable on the ways social media has contributed to the stereotyping of women, in which speakers discussed the horizons and importance of uniting the efforts of activists, feminist civil society organization and media agencies, to undermine and break these stereotypes.

In the end, the Palestine Digital Activism Forum in its 5th edition, was able to reach 1500 participants, and connect them with experts, activists and decision makers in social media companies, governments and civil society organizations all over the world. The forum brought them all together, in one space, defying all the barriers, borders and physical obstacles that fragment Palestinians and undermine their voices in the digital world, reiterating the necessity of such spaces, and the importance of making them equitably accessible for all people.

We are heavily indebted to everyone who supported 7amleh — the Arab Center for Social Media Advancement, including our local, regional, and international partners and supporting organizations, such as DW Akademie, Konrad-Adenauer-Stiftung (KAS), Action Aid, International Media Support (IMS), the Foundation for Middle East Peace (FMEP), Access Now and everyone who contributed to the success of PDAF 2021.