What defines us – what unites us | Perspectives 2016

This Annual Report again documents a variety of activities, outstanding events, and projects while also underscoring our staff’s high level of professionalism and expertise, as well as their commitment worldwide to democracy, human dignity, freedom and the rule of law. We are certainly most grateful to all of them.
May 23, 2016 Ordering Information

Our country and the European Union faced one of the biggest challenges of its history in 2015. Flight and migration have been on the national and European agenda for a long time, but the refugee problem has fanned an incredible momentum at all levels of the state and society. More than one million people found refuge in Germany in the last year alone. in his State of Europe speech on 9 november 2015, the president of the European Council, Donald Tusk, called on Germany to take a leadership role in the refugee crisis.

As a stakeholder in European and international cooperation, as a political think tank, and as an institution with a mission of civic education, the Konrad-Adenauer-Stiftung contributes in a variety of ways to address this challenge. Our guide “Germany. Initial Information for Refugees” published in German and Arabic is an example of a rapid and concrete response to a new situation. Fundamental processes of change must also be seen as opportunities for shaping the future. Under our 2016 slogan “What defines us – what unites us”, we will contribute to strengthening the common European and Western identity, and explore questions of social cohesion.

The year 2015 was shaped by conflicts like hardly any other: whether it was the wars in Syria and Iraq, the ongoing confrontation in Ukraine or the terrorist attacksin the heart of Europe. They show that the Western-style liberal democracy we support worldwide is not a self-evident model. Systemic competition with ostensibly stable authoritarian regimes will increase further. Many countries have passed so-called “NGO laws” that limit the civil society’s scope for action. This stress test for the democratic idea can only motivate us even more in our work.

But in Germany, too, there are signs the democratic order is eroding. Less and less people make a longterm political commitment, and that is accompanied by insecurity in the middle of society. Populist tendencies and an increasingly coarse tone of discussion online are on the rise. To fight this trend and to promote the democratic idea has always been and remainsour mission, as embodied by the slogan under which we articulated our 2015 programme: “Show your colours – democracy needs democrats.” Being open to change and defending the right traditions is what matters. We are proud to have celebrated two democratic milestones in 2015: the 25th anniversary of peace and freedom brought on by German reunification, as well as 50 years of German-Israeli relations.

This 2015 annual report, along with the Perspectives 2016, will provide you with good sense of the many areas where we are active. It reflects the competence, engagement, and creativity of our staff in Germany and abroad. We would like to thank them for their exceptional work. Our thanks also go to all those who support our efforts – to the friends of the Konrad-Adenauer-stiftung, our donors, sponsors and partners – and thus express their confidence in the foundation. Would you like to know more? Then have a look at our website, www.kas.de. In 2015 6.2 million visitors did so. 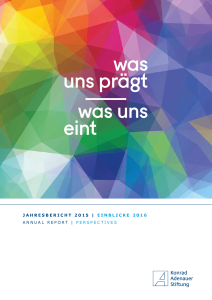