With Confidence into the Future | Perspectives on the Year 2017

This Annual Report highlights a selection of the various activities of the Konrad-Adenauer-Stiftung. Taken together with additional information provided on our web site (www.kas.de), it reflects the high level of commitment, competence, and dedication of our staff and contributors both in Germany and abroad. We would like to take this opportunity to express our gratitude to them all.
September 16, 2018 Ordering Information

The year 2017 was characterized by turmoil not only in international relations, but also in European and German domestic politics. During his first year in office, American President Donald Trump has held the world in suspense as a result of his fundamental reshaping of trade, immigration, and foreign policies.

Multilateralism and alliances are increasingly being called into question. This is also the case for the European Union, which, in the wake of Brexit, separatist aspirations, and disagreement among member states on key issues such as the refugee crisis, finds itself confronted with a crucial test. In addition, populist political parties and movements have been gaining strength in many countries and have acted to exac er bate the crisis. By contrast, the French have clearly expressed their support for Europe by electing Emmanuel Macron as their president. The consequences of the Syrian civil war can be felt far beyond the boundaries of the Middle East. And 2017 has also seen series of devastating terrorist attacks both within Europe and abroad.

Germany cannot insulate itself from these changes to the international order. This has led many to become apprehensive, while others, in turn, have intentionally taken advantage of the situation to promote their own aims. Our country, however, is well prepared for future challenges. Employment is at a record level, the budget is on a solid footing, and investment in education and research is greater than ever before. Germany is a successful democracy, a reliable ally, committed to European integration, and a respected partner.

As such, the work of the Konrad-Adenauer-Stiftung in 2017 can be summarized under the leitmotif of “With Confidence into the Future”. As part of our work in Germany, Europe, and throughout the world, we provide analyses necessary for policy making, conduct research on historical and political themes, advise domestic, European, and international decisionmakers on politics, the economy, and society, support talented young people, and promote literature, art, and culture.

We will continue to engage in discussions focusing on the future. We concern ourselves with the state of democracy and with the central theme of education. We inquire into what binds us together as a society and the driving forces behind it. We seek answers that are as close as possible to the concerns of citizens in order to encourage a willingness to change wherever necessary.

This annual review highlights a selection of the various activities of the Konrad-Adenauer-Stiftung. Taken together with additional information provided on our web site (www.kas.de), it reflects the high level of commitment, competence, and dedication of our staff and contributors both in Germany and abroad. We would like to take this opportunity to express our gratitude to them all.

We would also like to extend our thanks to the commit tee members for their constructive cooperation, as well as to the Freundeskreis (Friends of the Konrad-Adenauer-Stiftung), our donors, sponsors, and partners for their support. We will continue to make every effort to justify the trust placed in us.

We hold the future in our own hands. Let us vigorously work together in a combined effort to write the next chapter in the story of our country! 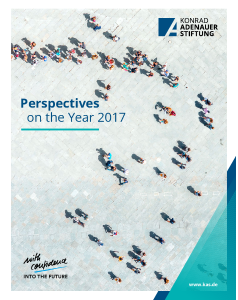