A Breakthrough at Long Last? On the Revival of the Israeli–Palestinian Joint Water Committee

In the latest issue of the KAS Journal "International Reports", Marc Frings and Johannes Lutz take a closer look at the recent resurgence of the Israeli-Palestinian Joint Water Committee
October 20, 2017 Ordering Information

This is particularly true of the Middle East, one of the world’s most arid and unstable regions. The situation in the Gaza Strip is certainly dramatic, but unresolved water issues are also causing conflicts between Israelis and Palestinians in the West Bank, as Marc Frings and Johannes Lutz discuss in their contribution to the latest issue of the International Reports. The recent resurgence of the Israeli-Palestinian Joint Water Committee is a sign that both parties are prepared to take

pragmatic action. Nevertheless, there is a risk of further destabilization of the region if no mutually acceptable solution can be found to the water issue.

The whole issue and further information about the International Reports can be found at: http://www.kas.de/wf/en/35.454/ 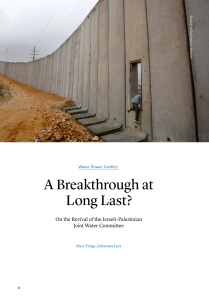 A Breakthrough at Long Last? ﻿On the Revival of the Israeli–Palestinian Joint Water Committee (Pdf)
Download
Contact Person