The provisions of Article 370 of the Indian Constitution, which gave special status to Jammu and Kashmir (J&K) by giving it autonomy over internal administration of State, State’s own Flag and constitution, was read down through presidential order and thereafter a Bill of Reorganisation to convert J&K from a state of the Indian Union into two separate Union Territories (UTs) also sailed through with more than 2/3rd majority in both the houses (Lok Sabha and Rajya Sabha) of Parliament (Had it been a constitutional amendment, even that would have sailed through!!). The state was divided into two Union Territories- J&K with an elected legislature including the area of POK and the Ladakh division including Aksai Chin but without legislature. This historic decision taken on 5th August 2019 also included deletion of Article 35A.
September 18, 2019 Ordering Information


The boot-shaped bowl valley known as Kashmir or Kashir, which is believed to be sacred in Hindu Mythology encompassing Vedic, Buddhists and Brahmanical times, has encountered many sufferings throughout history including the invasion by the Sultans, the Chaks, the Mughals and the Afghans for about 500 years (1320 to 1819 B.C.). The Sikhs ruled for about 27 years (1819 to 1846 B.C.). (More can be read from Kashir I and Kashir II).
A century later, dissolution of British Raj created India and Pakistan, but the unfinished partition of Kashmir had major consequences. The most important one was the invasion of Kashmir Valley code-named Operation Gulmarg by Pakistan Army disguised as tribal militias resulting in the last ruling Maharaja of Dogra Dynasty Hari Singh’s decision to accede to India by signing Instrument of Accession(IOA) on 27th October 1947. The termination of Singh’s rule lead to inclusion of IOA in Article 370 after the implementation of Indian Constitution in 1950.

So what do Articles 370 and 35A signify: -
Article 370 had the effect of insulating the J&K from certain provisions of the Indian Constitution applicable via powers of center over the states. Thus making it more autonomous with respect to everything but defense, communications and foreign affairs.
Article 35A was conceived vide Presidential Order in 1954 to empower the State Legislature to define permanent residents and their special rights and privileges where in the Indian citizens from other states could not own any land or property in J&K nor apply for Jobs or have other state benefits of higher education and health care that the center provides to each state annually.
In 1954, J&K constituent assembly, ratified The Constitution Orders 1954 (Application to the J&K also known as Presidential orders). This order also contained introduction of controversial Article 35A, as it was believed that it created a special class of citizens with in India. Soon after the dissolution of the J&K constituent assembly Presidential power came into effect and thus the Provisions of 370 were titled as “temporary provision(s) but attained a sense of permanence by sheer passage of time.
While Article 370 guarantees the special status, it is subject to exceptions as the President may so specify and article 35A is one of such exception.
THE PRESENT

The Bharatiya Janata Party (BJP) government led by PM Modi decided to eviscerate the special status of J&K as announced by the Home Minister of India Amit Shah. Since last December, J&K has been under the President’s Rule which allowed him to withdraw the provisions of Article 370 and Article 35A with the approval of the Governor (acting as a substitute for State’s Legislature). Prior to this already more than 35,000 Troops were deployed to step up security in the valley. Shortly after the decision was announced, there was a lockdown in the state and all mobile as well as internet services were suspended. Several local and national leaders were placed under house arrest. These measures, the government said, were adopted to contain any resultant acts of violence or unrest in the valley and surrounding regions.
Apart from the support that the government received for the passage of the bill, many raised concerns over the manner in which the decision was simply imposed on the Kashmiris without giving them a chance to voice their opinion. Some fear that further polarisation within the nation was a distinct possibility whereas the government looks at it as a step that was promised in the election manifesto since long and that has now been delivered. It is important to note that some claim this move to be unconstitutional and arbitrary in nature and therefore, it is unlikely that it can get away with legal scrutiny as it has been challenged in the Supreme Court. The Supreme Court issued a notice to the Centre that a five-judge Constitution bench will hear all petitions regarding abrogation of Provisions of Article 370 early in October.
India has always maintained its position of the decision being an internal matter and received support from the international community as well. China and Pakistan, who consider themselves as stakeholders in the Kashmir region, seized the opportunity perceived to add momentum to their efforts to raise the issue on international platforms. It is important to note that with the decision of dismissing Article 370 and 35A, the current borders have not changed. These actions in no way affect the regions occupied by the Chinese and Pakistanis or raise a fresh claim on the same.

The government sees the withdrawal of article 370 and 35A as important milestones for the unity and integrity of the country. But the fact remains that a cautious approach needs to be undertaken while furthering their aims of social, economic and political development in the region wherein building and trust of the Kashmiri people is critical to all round development even though attaining them for accusations of forced demographic changes etc. are bound to raise their ugly heads.

Though force can protect in emergency, only justice, fairness, consideration and cooperation can finally lead men to the dawn of eternal peace. Dwight D. Eisenhower

On plus side, social impact of the ruling is that the decision has long term consequences on and for the people of Kashmir. As the Kashmiris can now have access to Right to Education and such other people centric laws which are applicable across all the other states in India. Furthermore, the rule that if a Kashmiri woman gets married outside the state, she would lose her right to property, will no longer be pertinent. Other changes can be read here. Also the gateway for commerce and huge investments from across India is opened for greater economic prosperity and for plugging-in the two UTs into the Indian economy. This can make J&K and Ladakh now less dependent on the grants of Centre at least after the initial year. With these key changes assembly has expanded to 114 seats from 108 seats and further election commission will delimit the constituencies.
This decision is just the start of a process fraught with risks and may, at both national and international levels become a minefield if not handled carefully. But as they say; Hope springs eternal, even in politics!! 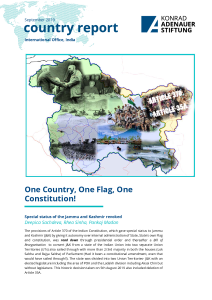