The Judicial Reform and Referendum in Serbia - www.kas.de

The Judicial Reform and Referendum in Serbia

After the passing of the Law on Referendum and People’s Initiative (Referendum Law) on 10th December, the government initiated a campaign for a reform to the Judiciary System.

The campaign for the Referendum lasted little over a month, with both those for the “YES” and those for the “NO” vote being rather reserved, compared to how intense election campaigns can be. There was very little public debate on the issue. The split regarding the Judiciary Reform cuts across party and ideological lines. Legal experts and intellectuals advocated for the “NO” vote as the Judiciary Reform would make judges and prosecutors independent of any control, which goes against the “checks and balances” principle of democracy. Those who supported the “YES” vote primarily did so on the grounds that the reforms bring Serbia closer to the EU and EU standards and make the Judiciary truly independent. The Referendum was held on Sunday, 16.01.2022, and the turnout was little under 30 %. The “YES” vote got 60.48 %, while the “NO” vote got 39.52 %. Serbs from Kosovo were not allowed to vote by the Kosovar Government, so they had to vote in Serbia. Protests were held in Belgrade in front of RIK (Republička izborna komisija/Republic Election Commission) because of supposed voter fraud. Protests were also held in Kosovo by local Serbs, because they were not allowed to vote.
January 24, 2022 Ordering Information

The Referendum itself, Results and Controversies

The Referendum was held on Sunday 16.01.2022. It lasted from 7:00 to 20:00h. According to SNS (Srpska napredna stranka/Serbian progressive party) voter turnout was a little short of 30 %, out of whom 66.48 % voted “YES” and 39.52 % voted “NO”. In Belgrade, Novi Sad and Niš the “NO” vote got the majority, where in Belgrade for example 54.6% voted “NO“ and 45.4 % “YES”. CRTA (Center for Research, Transparency and Accountability) gave alternative results of 57.4 % “YES” and 41.6 % “NO” vote, with a voter turnout of 29.6 %.[1] President Aleksandar Vučić presented the results tallied by SNS (Srpska napredna stranka/Serbian Progressive Party) in the party HQ, which the liberal opposition found unseemly. RIK, the only legal and legitimate institution that publishes election and referenda results, published the reports later than SNS, with similar results. On Thursday 20th January RIK came out with the official results: voter turnout was 30.65%, 59.59% voted “YES” and 39.38% voted “NO”[2]. The vote will be cast again on Sunday 23rd January in 9 polling stations, due to irregularities. In total these polling stations cover 7711 voters and they cannot influence the results in any meaningful way. Both Vučić and Ivica Dačić, the President of the Parliament and SPS (Socijalistička partija Srbije/Socialist Party of Serbia) stated that the results are not indicative of the support for the governing coalition, which is larger than the “YES” vote. Dačić was also satisfied particularly because the topic “wasn’t very interesting and it was believed that it was imposed by the EU, to which a part of the public is “allergic”, including our party members.”[3] Vučić stated that a lot of the SNS membership voted “NO”, since they see this as a pathway for our justice system to become “vassals of foreigners, as our neighbors are” and that it is the fault of SNS that they haven’t explained the matter sufficiently to their own voting base.[4]

Serbs in Kosovo were not allowed to vote in the Referendum and had to go to Serbia and vote. Regarding the Kosovo issue, Vučić stated that the Quint (UK, US, France, Germany and Italy) is capable of calling Albanians to respect Serbian right to vote “but if Priština doesn’t allow it, you will not hear a word of protest, let alone actions or sanctions.”[5] A Serbian man was attacked by Albanians in Rudnik, Kosovo, which the Serbian government condemned. According to the Serbian President this will have long-term consequences, “but they [probably meaning Albanians or the International Community] do not need to know all and hear all.” he stated.  The Office for Kosovo and Metohija has stated that the attacked person “was a target solely because he proudly wears his Serbian name and surname and his šajkača [traditional Serbian hat].” The image provided in the article and the one that circulates online shows the young man wearing a šajkača.[6] Serbs from Kosovo organized protests in Northern Mitrovica because of the problems with voting and attacks on Serbs.

Some NGOs reported voting irregularities, ballot stuffing etc., particularly in Central Serbia such as Novi Pazar in Sandžak[7]. Another issue is that the opposition could only cover 70 % of polling stations with its vote watchers[8], according to Miloš Jovanović, leader of the opposition party DSS. Furthermore, according to CRTA up to 1/3 of voting committees didn’t operate under full capacities, due to COVID, which strictly speaking is against constitutional reform procedures.[9] CESID (Centar za slobodne izbore i demokratiju/Center for Free Elections and Democracy) also reported some irregularities. Because of these irregularities protests were held at 18:00h in front of RIK, which were organized mostly by rightwing parties such as: Dveri, Zavetnici and POKS[10].

Oliver Varhelyi (European Commissioner for Neighbourhood and Enlargement)[11] and Vladimir Bilčik (European Parliament Rapporteur for Serbia)[12] commended the referendum via their twitter accounts, as evidence of EU support for the referendum process, the “YES” vote and the government. Furthermore, Vladimir Bilčik and Tanja Fajon, the Chief of the EU Parliament Delegation to Serbia, in a joint statement praised the Referendum and the fact that the citizens of Serbia “supported the change to the Constitution so that the legal system could be more independent” adding that this is “an important step for Serbia on the path to EU integration”[13].

The Campaign for the Referendum

There was very little public debate about the issue and the campaign was much more relaxed than campaigns for elections were. EC (European Comission) and VC (Venice Commission) asked for as wider inclusion as possible. For the VC the process was “sufficiently inclusive and transparent”, though they state that it is “important for the Serbian authorities to actively seek the participation and involvement of the opposition”[14].

The issue cut across ideological and party lines. For example, Prime Minister Ana Brnabić (SNS), Ivica Dačić (President of the Parliament, SPS) and Maja Popović (Minister of Law, formally not a member of any party) supported the reforms and stated that they were done in accordance with VC and EC recommendations. However, Vladimir Đukanović (SNS, MP) and Toma Fila (SPS, MP) were against the changes, as prominent members of the governing coalition.[15] Certain professional associations of jurists were against the reforms, such as the Union of Prosecutors of Serbia, Belgrade Center for Human Rights and YUCOM (Lawyer’s Committee for Human Rights); which see this as a concentration of power in the judiciary[16]. Regarding the opposition, the Referendum became a source of tension as well. Some opposition parties such as SSP, NS and DS called for a boycott of the Referendum while others like Dveri, DJB, DSS-POKS, PSG, Zavetnici, SRS, NDB campaigned for a “NO” vote.

Regarding ideological issues, the Referendum cuts across ideological lines between liberals[17], nationalists[18] and socialists[19], who have their own reasons for and against. They mostly revolve around the issues of judiciary independence and national sovereignty.

RTS (publically owned TV company) and Politika (newspaper, private) followed the Campaign, with RTS holding two prominent prime time debates, one with guests from the world of politics[20] and one with legal experts[21]. In both debates those advocating the “NO” vote argued that the Reforms lead to an alienation of Judiciary from democratic and parliamentary control and that they are enforced by the EU. Those who were for the “YES” vote supported the Reform as a means of getting closer to EU membership and standards. All in all, however, the media and the public weren’t as informed nor electrified as they usually are during an election campaign.

What was the Referendum about?

The entire reform process has been going on since 2007 and as a part of Serbia’s EU accession process, specifically Chapter 23-Law and Basic Rights[24], which was opened in 2016. The VC and the EC consistently stressed that there is too great an influence of politics on the judiciary and the new reforms to the Judiciary System were crafted in consultation with the EC and primarily with the VC. The goal of these reforms, as EC, VC, the government and some legal scholars stated consistently; was to make the Judiciary more independent from political influences. Some members of the NGO sector and oppositional intellectuals, such as Milan Antonijević, (lawyer, former Director of Open Society Foundation Serbia) advocated for the “YES” vote primarily on these grounds.

The Referendum results have ushered in changes to the Judiciary System. However they merely set the course of the changes and set up the institutional structure broadly, while specific changes will be defined by further Laws concerning the Judiciary system. It is unlikely that the current Parliament will enact new Laws regarding the Judiciary and they will probably wait after the Elections on 3rd April 2022. New Referenda on this issue are highly unlikely in the near future. Public debate was lower than before the elections or before the Referendum from 2006, which lead to the current constitution. The reason is primarily that legal issues though important, are not interesting for the wider population and the media. For this reason RTS, the public TV channel, held debates on the issue in prime time, while commercial channels didn’t or did so infrequently.

The fact that Serbs couldn’t vote in Kosovo caused tensions between Priština and Belgrade, as well as the attacks on Serbs generate tensions in Serbia and anti-Albanian sentiment. The Referendum also ties in with the elections in April, with both the government and the opposition seeing the Referendum as indicator of their success in the upcoming elections. According to the opposition, the Referendum shows that 40 % of the population is against the government and that the “NO” vote on the Referendum would translate into votes for the opposition in April. Governing parties disagree and state that there were many voters of SNS and SPS who voted “NO” on the Referendum, but would definitely vote for SNS and SPS in April. As we have stated above, the analysis of the governing parties is likely true, as the referendum did cut across political and ideological lines.

In conclusion, the Referendum process went smoothly as commended by EU officials and international organizations. Protests against the results are small-scale and mostly led by radical rightwing parties. The results of the Referendum clearly affirm the EU perspective of Serbia and those who campaigned for the “YES” vote consistently stressed that the proposed reform puts us closer to the EU. Since this was the key argument, apart from greater judicial independence, we can deduce that calls for getting closer to the EU appealed to 60 % of voters. This attests to the fact that the EU and future EU membership status still hold sway among the public. 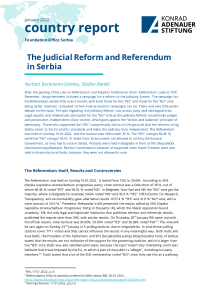