by Olaf Wientzek, Christian Bilfinger
UNHCR has published its new Global Report on refugees at the end of June. The following analysis summarizes some key points from the report.
September 2, 2019 Ordering Information 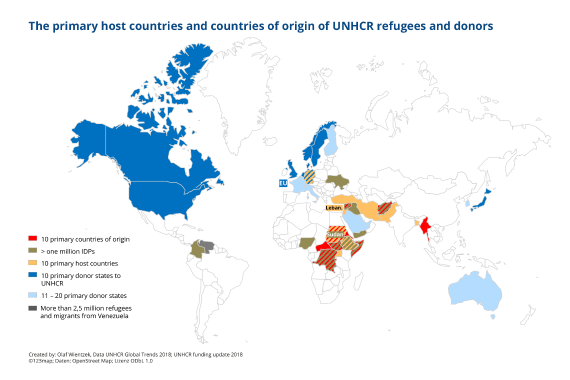 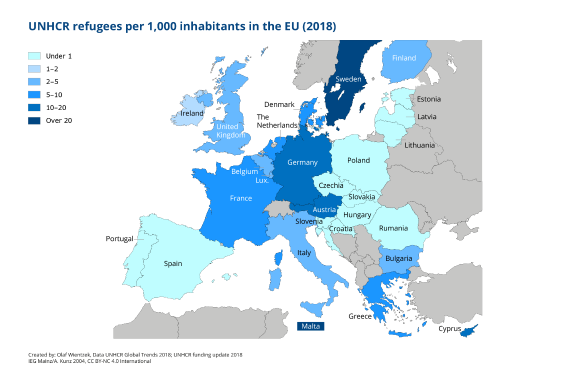 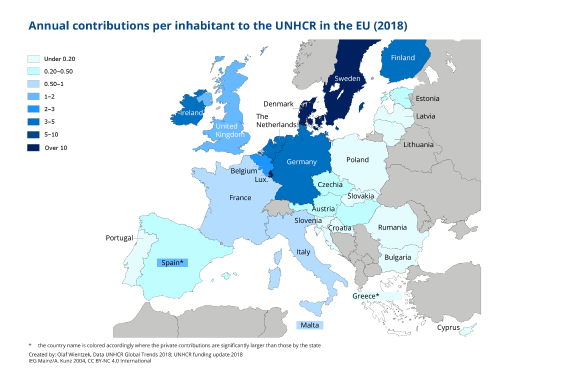 IEG Mainz/A. Kunz 2004
Annual contributions per inhabitants to the UNHCR in the EU (2018)
1. The number of refugees has risen worldwide: A total of 70.8 million people, almost 1% of the world’s population, were fleeing at the end of 2018. 58.3% of them were internally displaced people (IDPs) while 20.8 million were considered refugees under UNHCR’s mandate – a number that has almost doubled since 2012. Half of them are underage. Overall the number of refugees has risen in total as well as in relative numbers in comparison to the prior year.

2. The most recent development – increases in Ethiopia and Venezuela: 13.6 million refugees were newly registered due to conflicts and persecution in 2018, 80% of them are IDPs. The increased number of IDPs in Ethiopia – now 2.6 million persons – due to conflict and of asylum seekers from Venezuela are most striking. The number of IDPs in Ukraine remains high at 1.5 million people  despite a decrease by 0.3 million.

3. Most refugees stay in their respective region: Nearly 80% find refuge in a country bordering their home country. Only four in a hundred refugees leave their region taking IDPs under consideration too. The refugees from nine out of the top ten countries of origin remain for the most part in their region with the exception of Eritrean refugees. Noteworthy: Germany is the only country among the top ten host countries to not directly share a border with a crisis region.

4. The development differs regionally: The number of UNHCR-refugees has decreased slightly in some regions like Central Africa/ the Great Lakes Region, while significantly increasing in West Africa and moderately increasing in Europe and Turkey.

6. The main countries of origin – Turkey holds the first place again: Turkey remains the most affected country in total numbers for the fifth time in a row with 3.7 million refugees (predominantly from Syria). It thus hosts 17% of all UNHCR-refugees, while the entire EU hosts 14%.

7. The EU is significantly but not outstandingly affected on a global scale: There are a total of 2.5 million refugees in the EU which equals 0.5% of the EU’s population. That quota is below average on a global scale. The EU member states are very differently affected in terms of relative and total numbers.

8. Is Germany the EU’s largest host country? – Yes and No: Germany is the world’s fifth largest host country with slightly over one million refugees. Thus, it is the largest EU host country by a wide margin. But that picture changes considering refugees per inhabitant. Sweden, Malta and Austria are most affected by that measure; Germany shares the fourth place with Cyprus

10. Solidarity has much room to grow: The commitment in regard to resettlement and humanitarian reception of recognized refugees (29 states offered 81,000 slots) does not nearly satisfy the demand of 1.4 million places. UNHCR’s financial requirements are only covered by 57%. 86% of the promised funds come from national governments and the EU, the financial burden is not distributed equally. In fact, 87.7% of all funds are attributed to the ten largest donors. The US, even under the Trump administration, remains the largest donor by a wide margin; the EU and Germany follow in second and third place respectively. The US’ financial contributions are approximately as high as those of the following nine state donors, including the EU. Norway, Denmark, Luxemburg and the Vatican are the most committed donors taking per capita contributions into account. Noteworthy: Germany is the only top ten host and donor country. 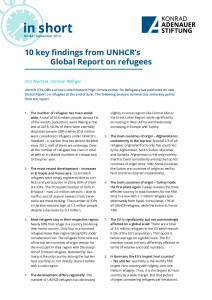