The perception of crypto currencies as a shady payment method for criminal businesses appears to fade away. At least this is what Facebook must be speculating on. Last summer the social media company announced the development of a cryptocurrency, set to release in 2020. Its name is Libra and considering the 2 billion active Facebook users, Libra could transform Facebook into a serious actor within the international finance sector overnight.
January 13, 2020 Ordering Information

What it is and what it does

Facebook describes Libra as an addition to national currencies.(1) Similar to PayPal, users can send the currency like text messages via their smartphones or computers to other users all over the world without transaction fees and within seconds. In order to pay with Libra a digital wallet is required. It is currently under development by Facebook’s subsidiary company Calibra.(2) The wallet serves as a tool to manage one’s deposit and execute transactions, similar to a bank account. It is planned to release as a standalone application as well as an additional service implemented into the mobile versions of the Facebook Messenger and WhatsApp. The currency exchange between national currencies and Libra is possible through the digital wallet or with prepaid cards. With the latter, the business model of Libra aims at integrating customers without a Facebook profile and people who do not have a bank account. Libra is thought to gradually develop itself into a global payment infrastructure that specifically targets regions where financially weak populations have difficult access to financial services.(3) By attracting the people, who are systematically excluded from the financial sector Facebook attacks the established banking system. Although the registration for Calibra requires the user’s personal identity card, transactions with Libra are anonymous and users can have multiple addresses without any link to their own identity. This lack of transparency may be attractive to some individuals, but institutionally it bares many potential risks.

In technical terms Libra is developed as a so-called stablecoin. These are crypto-currencies which, unlike Bitcoin and others, are secured by government bonds and bank deposits to avoid high volatility. Responsible of preserving a consistent value of Libra is the Libra Reserve, which functions as money storage through low-risk assets. The reserve’s organization is managed by the Libra Association, a decision-making body made up of private sector companies such as Spotify, Uber and also Facebook.(4) The association is in charge of Libra’s distribution and oversees the hardware and software maintenance.(5) At the beginning of Libra’s distribution phase Facebook’s role in the entire structure is planned to be superordinate compared to the other members. However, the company states that after Libra’s release Facebook will downgrade its position and match the amount of control and influence on the currency to the other members in the association. Currently Facebook is the only service provider of a digital wallet for Libra. Thus, Facebook will most likely retain access to all important information channels within the currency’s ecosystem. This situation reveals a crucial shortcoming, at least from the perspective of political decision makers.

A currency without trust

It is no secret. When it comes to handling user data, Facebook did not cover itself with glory. This general perception could not even be turned to the better by Facebook’s CEO Mark Zuckerberg during his congress hearing regarding Libra. Especially questions concerning the mechanisms and tools Facebook intends to deploy in order to ensure regulated use of Libra were largely left unanswered. A task force of the G7 finance ministries and central bank governors published a Libra report(6) and confirmed what was also stated in Germany’s blockchain strategy paper(7): private stablecoins are no reliable and safe alternative to government currencies. As long as it is not defined who bears the investment risk, how money laundering and terrorist financing is prevented despite anonymization and how data protection is guaranteed, Libra will be hindered by strong regulations. In addition, the withdrawal of PayPal, Mastercard, Visa and Ebay from the Libra Association shows the increasing reluctance of established players towards Libra. If Facebook ever expands its services to the financial sector with Libra is solely dependent on political decision-makers. The association of German Banks has publicly linked the competitiveness and success of Europe to the development of its own digital currency(8). A crypto currency backed by the European Central Bank could not only combine the best of both worlds: long-term value stability and technological progress. Above all, an E-Euro would be a clear European response to the digital transformation of the monetary system. 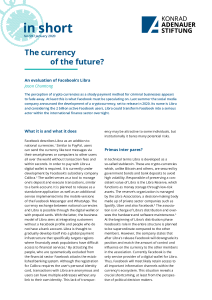 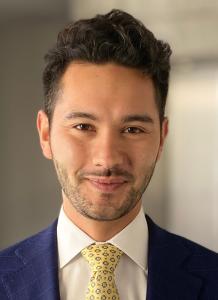 Dare to be Strong and Different