Diversity and democracy in the Conservative Party - www.kas.de

Diversity and democracy in the Conservative Party

Over time, the Conservatives have come to look and sound a little more like the country they aspire to run.

The British Conservative Party can lay claim to be one of the oldest and most successful political parties in the world for many reasons. Perhaps the most important is its near-legendary ability to adapt in order to reflect the society in which it operates.  It does this mainly by adjusting to changes in the economy and socio-cultural mores – some, that it helps to shape, some which it has little choice but to accommodate itself to.  Policy, however, is not everything.
November 7, 2022 Ordering Information

Although far from a microcosm of the UK population as a whole, the Tories are no longer a party purely of the elite or, at the very least, the upper middle class.  They are also less uniformly white than they were a couple of decades ago – at least at the parliamentary level. Moreover, at the level of the grassroots, there are arguably more opportunities for members to participate in decisions than there used to be, most obviously, when it comes to choosing their party’s leader.

All this was evidenced in the leadership contest held by the party in the summer of 2022, during which commentators from around the world remarked on the fact that both female candidates and candidates from ethnic minorities were well represented in the initial, parliamentary stage of the race. One, which was followed by a full membership ballot that gave the grassroots a choice between the incumbent Foreign Secretary Liz Truss and Rishi Sunak who had just resigned as Chancellor of the Exchequer. When Truss was finally forced to resign after two unsuccessful months in office, Sunak replaced her.

These changes have not, however, produced a Conservative Party which can be said to be as diverse or, indeed, as internally democratic as its main competitors – the Labour Party, the Liberal Democrats, or the Scottish Nationalist Party. All of which can boast of being more demographically representative than the Tories.  How much this advantages them and disadvantages the Tories, though, remains a moot point and one reason, perhaps, why the Conservative Party is arguably neither as concerned about diversity nor as representative as many might think.

Read the full monitor: „Diversity and modernity in the Conservative Party“ here as PDF. 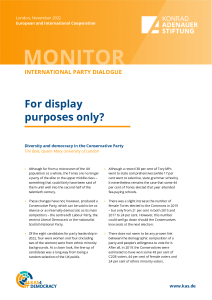 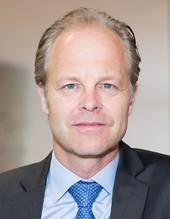