Good or only good intentions?

Policymakers and the public are currently discussing three proposals in particular for strengtheningthe democratic legitimacy of the EU.President Emmanuel Macron, to carry out “citizens’ consultations” on the future of the EU as ofApril 2018.
February 23, 2018 Ordering Information

a) Continuation of the “Spitzenkandidaten” (top-candidate)

procedure which was first applied during the 2014 European election: Five of the European party

families ran with their own candidates for the office of Commission President. b) Using the seats in

with cross-border (“transnational”) electoral lists. c) The proposal propounded by the French

President Emmanuel Macron, to carry out “citizens’ consultations” on the future of the EU as of

1. The “Spitzenkandidaten” ensure greater transparency and legitimacy: At the national

and regional level, it is always clear which candidate the electorate indirectly votes for Chancellor

or for Prime Minister. Similarly, voters should also know which Commission President

they indirectly vote for during European elections. What’s more, it will strengthen the political

the latter. Accordingly, only a top candidate from a European political family should be considered

for the position of Commission President in the future; this would adequately take into

consideration the result of the European election.

2. Enhancing the process: A study carried out following the 2014 elections indicates that

the (election) turnout in the respective EU countries.For this reason, national member parties

party family. In the future, top candidates should also make public appearances in all countries

in which their party family is represented. Therefore, the top candidates ought to be

determined at an early stage (late 2018). The programme of the respective party family

should be suitable for the candidate.

3. Increasing the visibility of the European party families: In 2014, there was still very

their respective parliamentary groups within the EP; this is partly because they were

scarcely mentioned by their member parties during the last election campaign. In 2019,

the respective European party family should also be listed on the ballot papers, election

posters and other electoral material in addition to the national party.

Hypothesis 2: Transnational lists are a well-intentioned, yet unconvincing idea

4. Transnational lists would be too far removed from the people.A European Member of

Certain member states and parties are using regional rather than nation-wide electoral lists, so

as to ensure close links with the local citizens. Yet this link would be absent from Europe-wide

lists: Could candidates on these lists plausibly claim to be a point of contact for citizens residing

both in Tallinn and Seville alike? Such lists stand for centralism as opposed to the ideal of a federal

Europe: Even federal states like the USA do not have nation-wide electoral lists.

5. Risk of large states playing a domineering role: There would be a strong temptation to

place candidates from the large member states at the top of the list, since they mobilise more

votes than candidates from the smaller countries.

6. Limiting the efficiency of the European Parliament: Transnational lists could benefit populists

due to populists’ high-profile attacks, but who are not in fact interested in the work performed

by the EP. Transnational lists could open the gateway for short-term political movements which

have failed to gain a foothold in the member states, and which often quickly lose their importance.

This could result in further fragmentation of the EP beyond the existing 7-8 parliamentary groups,

7. Exploiting obvious alternatives: There is a range of alternative measures that would be

better suited to strengthening transparency, democratic legitimacy and the efficiency of the

EP: a) Improving the top candidate process, b) Raising awareness of the European party

families, c) Agreement about a reform of the European electoral legislation with the introduction

of a binding minimum threshold for large EU countries.

8. Integrating organized civil society: The proposal to increase public participation in the

reach the citizen, they ought to be carried out at local level in dialogue with organised

civil society (clubs, associations, churches, foundations) and with actors who have proven

themselves in the area of political education.

to exploit the potential of consultations as well as reaching apolitical and Euro-sceptic citizens, for

example. Accordingly, it is important to manage expectations so that dashed hopes do not lead to

by abolishing the “Spitzenkandidaten” procedure. 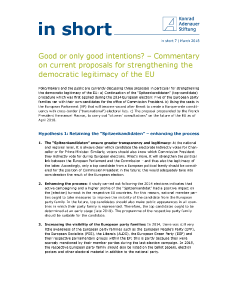