by Olaf Wientzek
In 2018, negotiations on the Multiannual Financial Framework (MFF) – the EU’s seven-year budgetary framework – are pending. The declared goal of the European Commission is to reach an agreement before the European elections in 2019. The United Kingdom’s withdrawal from the EU will mean losing one of the most important net contributors over the coming years. As a result, the inevitable restructuring of the MFF opens up opportunities for a comprehensive reform of EU finances. The restructuring should take the following guiding principles into account:
January 18, 2018 Ordering Information

1. Focus on new priorities: The expenditure side needs a complete overhaul, in which the MFF focuses on the key challenges the EU is facing. Expenditure currently constitutes 39% for agricultural policy and 34% for structural policy, yet only 13% for strengthening competitiveness; 6% for the item “Europe in the world” and merely 2% for security and European citizenship. The future budget ought to increase its focus on providing European public goods and on areas where there is evidence of a clear European added value: Competitiveness, foreign affairs, security, defence and migration. In turn, the agricultural funds and, to a lesser extent, funds for the structural and cohesion policy, should be reduced.

2. Linking funds to structural reforms: Part of the payment of the cohesion funds should be subject to the implementation of national structural reforms; in particular the country- specific recommendations from the European Semester.

3. Greater concentration of funds: The funds should not be distributed according to the shotgun approach, in other words to the largest possible number of priorities and regions. In any case, concentrating funds on European public goods would benefit all EU citizens in equal measure.

4. Cautious use of “rule of law”- conditionality: The Commission proposal to also make the allocation of funds subject to compliance with “rule of law”- standards is a good idea in principle – but only under strict conditions: The criteria for any withdrawal of funds must be clearly defined in order to prevent arbitrary actions. That would allow – as far as legally possible – the freezing or withdrawal of structural funds to be enshrined as a preliminary or intermediary step to the existing EU infringement procedure according to Article 7. Insufficient efforts made to combat organised crime and corruption should also result in a reduction of EU funds.

5. Increasing transparency – abolishing rebates: The future discontinuation of the UK rebate is a great opportunity to simultaneously abolish the intransparent network of rebates for other EU countries.

6. Step-by-step reform of the revenue side: The EU budget’s reliance on contributions from member states (71%), always leads to particularly difficult negotiations since discussions quickly transform into a net contributor/net recipient logic. The step-by-step increase of other sources of revenue, perhaps by using income from auctions as part of emissions trading, or revenues from the planned European Travel Information and Authorisation System, should be taken into consideration.

7. Strengthening flexibility: As the migration crisis 2015/16 has shown, unforeseen developments can occur that require a major restructuring of the budget items. For this reason, either the duration of the MFF should be reduced to five years, or the flexibility regarding the mid-term review of the MFF substantially increased.

8. No outright rejection of a moderate budget increase: An excessive curtailment of the agricultural policy (25-30%) would have dramatic repercussions on agriculture. A similar reduction of cohesion and structural funds would mean that Northern Europe, the Netherlands, Germany, mainland France as well as parts of Spain, to name a few, drop out of the funding completely. The “Brexit gap” in the EU budget cannot be filled by reductions alone. A moderate increase of the EU budget (from currently 1.03% of the gross national income to approx. 1.1%), should not be considered a taboo subject if drastic cuts are to be avoided and, at the same time, the “new” priorities are to be provided with sufficient financial resources. However, the prerequisite for such an increase would be to considerably strengthen the macroeconomic conditionality when allocating funds. In addition, the percentage of national co-financing should also be increased.

9. Avoiding populist arguments: There have been many requests to reduce the allegedly inflated administrative costs (6% of the EU budget) and, thus, also the personnel expenditure of the EU institutions. This ignores the significant cuts already made during the last legislative term. Moreover, the public debate about the EU budget should attach less importance to the net contributors/net recipients, and instead to the question of European added value of expenditure.

10. Considering the budget negotiations as part of EU reform: The restructuring of the EU budget ought to be carried out in close coordination with other projects (Eurozone reform, migration): Before creating new financial instruments for the Eurozone, it is necessary to exploit hitherto untapped possibilities of the EU budget. Regions that have shown solidarity towards other countries when accepting refugees, could receive additional budgetary resources. 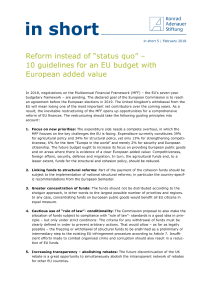